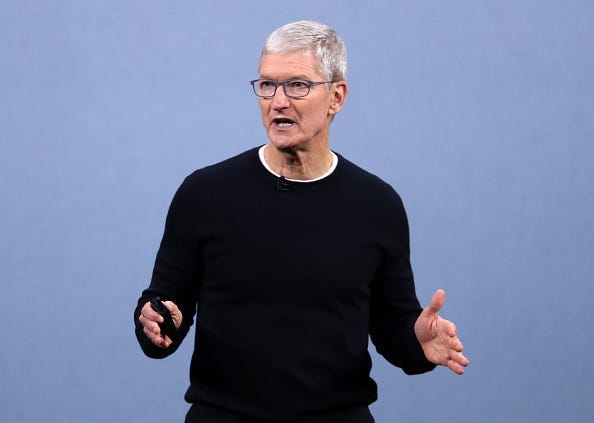 Washington — In an impassioned court filing, top executives at Apple, including CEO Tim Cook, urged the Supreme Court on Wednesday to prevent the Trump administration from terminating an Obama-era program that has shielded hundreds of thousands of young undocumented immigrants, known as "Dreamers," from deportation.

Cook and senior vice president Deirdre O'Brien filed a "friend of the court" brief weeks before the nine justices are expected to hear oral arguments on the prolonged litigation surrounding the Deferred Action for Childhood Arrivals (DACA) program. Allowing the government to end the protections, the tech executives argued, would potentially strip the U.S. of talented and patriotic young adults — including Apple employees — who have been in the country for most of their lives.

"Our interest in this case is simple: We are distressed at the prospect of ripping our DACA colleagues from the fabric of our company," Cook and O'Brien wrote in their brief, which was also filed on behalf of Apple. "This issue is a moral one: Our country made a deal with a highly vulnerable population interested in a bright future, and we should keep that deal."

Noting their company currently employs 443 DACA recipients across 36 states, Cook and O'Brien said "Dreamers" have been instrumental in the company's "ability to thrive."

"We did not hire them out of kindness or charity," they wrote in their filing. "We did it because Dreamers embody Apple's innovation strategy. They come from diverse backgrounds and display a wide range of skills and experiences that equip them to tackle problems from different perspectives."

Apple and other American companies, the tech executives added, "would be weaker and less competitive without these extraordinary individuals in our workforce."

In an interview with "CBS Evening News" anchor and managing editor Norah O'Donnell in June, Cook said he would continue advocating for DACA recipients until his "toes point up — if it takes that long."

"These folks are just incredible Americans," Cook said. "They deserve the title. They deserve to be in this country. It would be a travesty if something else happened. And so to me, that is clear and simple."

For almost two years, the Trump administration has tried to end the initiative, arguing President Obama overreached his authority when he instituted it through an executive order in 2012. But its efforts have been hampered by months of litigation. Since then-Attorney General Jeff Sessions announced in the fall of 2017 that the administration would move to gradually dismantle the program, four federal circuit courts have issued injunctions — one as recently as May — to block the government from doing so.

Because of the decisions by lower courts, the government currently allows the approximately 800,000 DACA recipients to renew their protections for two years, but is not accepting new applications or allowing beneficiaries to travel abroad through a special permit.

The program has allowed this group young undocumented immigrants to obtain work authorizations and driver's licenses if they meet certain requirements, including having arrived in the U.S before they were 16 and obtaining an American high school diploma or GED, or serving honorably in the military.

Late last year, the Justice Department asked the Supreme Court to take up the case. The high court refused the administration's requests to hear the case last session and instead scheduled oral arguments for November 12.

In their filing on Wednesday, Cook and O'Brien said the issue before the high court next month is one "where one's head and heart lead to the same conclusion."

"We collectively owe it to the Dreamers to hold up our end of the bargain. It is not just a legal requirement. It is the moral thing to do," they wrote. "Who are we as a country if we renege? What does it say about us as a people to turn our backs on the Dreamers now?"