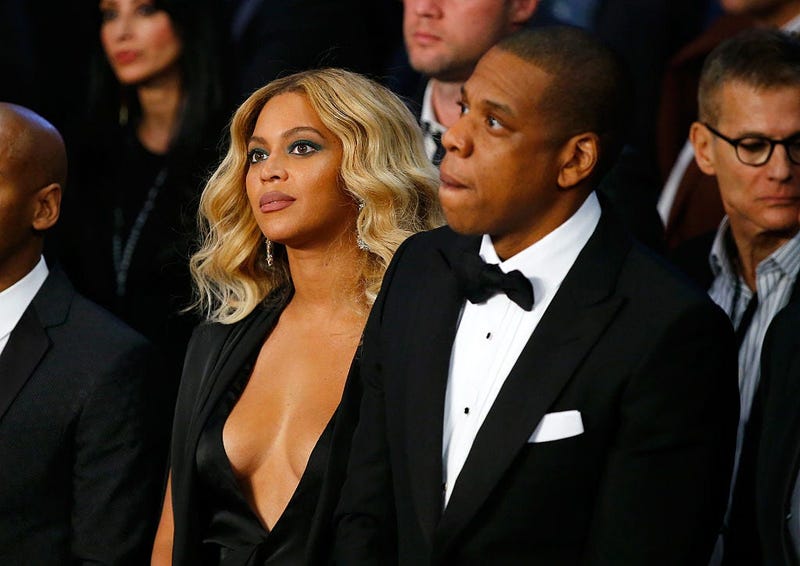 Beyonce and Jay-Z appeared to make a silent statement during the Super Bowl on Sunday night. During Demi Lovato's performance of the national anthem, the couple stayed seated, video obtained by TMZ shows.

That video went viral online, with many assuming the couple did not stand to show solidarity with some NFL players' sideline kneeling. The sideline protests were started by former San Francisco 49ers quarterback Colin Kaepernick, who first knelt for the national anthem in 2016.

Kapernick sparked a movement among many NFL players, who began to kneel on the sidelines to protest racial oppression and police brutality. The protests sparked a nationwide debate and even President Trump weighed in.

Beyonce and Jay-Z were seen staying seated during the National Anthem at the Super Bowl. Many suspect it was a silent protest, in solidarity with Colin Kapernick and NFL players who knelt during the anthem during past games.

NFL owners ultimately approved a new policy that permits players to stay in the locker room during the "The Star-Spangled Banner" but requires them to stand — and not kneel — if they're on the field.

The cellphone video shows the rapper and businessman, along with Beyonce and their daughter, Blue Ivy, staying seated as Demi Lovato belts out the national anthem on the field not too far below. Several other people in the area were also seated. It is unclear if anyone was intentionally protesting by staying seated during the song.

Jay-Z works with the NFL and co-produced this year's half-time show. Last year, the NFL and Jay-Z's entertainment and sports representation company announced they were teaming up for events and social activism.

The league said it would use Jay-Z's Roc Nation to consult on its entertainment presentations, including the Super Bowl halftime show, and also work with the rapper and entrepreneur's company to "strengthen community through music and the NFL's Inspire Change initiative."

Before the deal, Jay-Z had turned down invitations to perform at the Super Bowl, as had Rihanna. He has been a strong supporter of Kaepernick, and was criticized for his company's NFL deal, which many saw as contrary to his beliefs and support of the sideline protests.

One day before the Super Bowl, the entertainment mogul set the record straight on where he stands with the NFL and Kaepernick.  "No one is saying he hasn't been done wrong. He was done wrong," Jay-Z told The New York Times Saturday. "I would understand if it was three months ago. But it was three years ago and someone needs to say, 'What do we do now -- because people are still dying?'"

Jay-Z also said "as long as real people are being hurt and marginalized and losing family members, then yes, I can take a couple rounds of negative press."

CBS News has reached out to a representative for Jay-Z and Roc Nation and is awaiting response.

Jay-Z has long been vocal about criminal justice and prison reform. Earlier this year, he worked with fellow rapper Yo Gotti to hire representation for inmates in Mississippi, after several people died in the state's prisons at the start of the year.