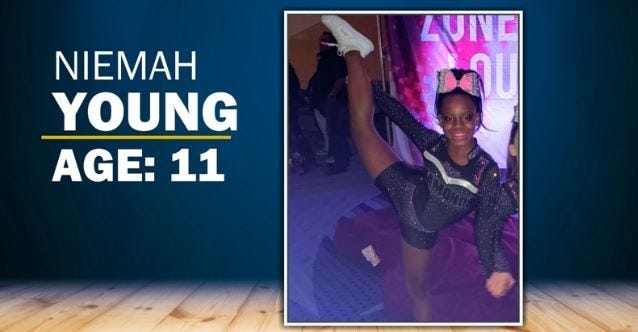 A black mother says her 11-year-old daughter was not allowed to compete with her Colorado cheerleading squad because the coach refused to let her perform with her natural hair. But the cheer coach said the girl was dismissed because her mom threatened the team.

"It is easily a two-hour process," she said. "I have to literally use a hard brush and pull her hair back into the tightest ponytail I can get it into."

Niemah wore the hair piece for a whole season, but became lightheaded at competitions because the ponytail was too tight. Trujillo made an exception for Niemah last season.

But this season, Young said the coach had a change of heart, calling out Niemah at practice. "The coach continues and asks the other teammates, how do you feel that this African-American girl gets to wear her natural hair?" Young said.

The national governing body for U.S. cheer and dance teams said "hair must be secured off the face with a simple and unexaggerated style that is adaptable to all diversities."

Some parents say Young is overreacting. "This kind of blindsided all of us I think, especially over something as minute as a $10 ponytail," said Jennifer Connell, a mother of another cheerleader.

But, Young said her daughter was kicked off the team over the issue. Trujillo, however, claims it's because Young made threats against the staff.

Diamond Elite Cheerleading said Niemah's dismissal "was never based on the athlete or her ethnic background. The decision was based on threats received that were directed at the staff which brought forth major safety concerns."

Young denies threatening anyone. "I've worked hard to not become that person that unfortunately black women and black men are portrayed to be, is violent," she said. "Whether they are white, black, Asian, curly hair, straight hair, no hair, all girls should feel supported."

Diamond Elite Cheerleading said it's reviewing uniform guidelines and expectations for all ethnic groups, and accusations about racism are untrue.

Niemah doesn't want to cheer anymore because she doesn't feel welcome in the cheer community, Young said, adding that she just wants an apology.