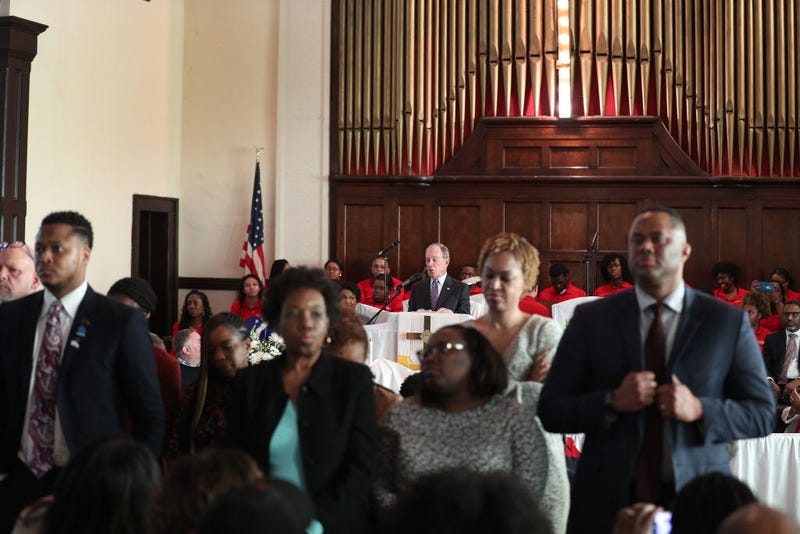 Bloomberg addressed the congregation at Brown Chapel AME Church during a church service in which he discussed voter suppression and the fight for civil rights. But roughly 10 minutes into his remarks, several in attendance rose from their seats and silently turned away from him.

The churchgoers remained standing through the end of Bloomberg's remarks.

Before he spoke, Bloomberg was introduced by the Reverend Leodis Strong, a pastor for the historic church, which was a key meeting place for activists during the civil rights movement. Strong recalled first inviting the presidential candidate to appear before churchgoers and said Bloomberg initially declined the request, citing his campaign schedule.

"I think that it's important for Mr. Bloomberg, Mayor Bloomberg, to hear from you, listen to you, to learn from you," Strong said.

As Bloomberg prepared to deliver his remarks, Strong reappeared to commend the mayor for reconsidering and accepting the invitation.

"Let me just say this. I think it's important that he came," Strong said. "And it shows a willingness on his part to change. And I like that, and I think that that is important."

Also attending the service at Brown Chapel was former Vice President Joe Biden, who won Saturday's South Carolina primary, and Stacey Abrams, who unsuccessfully ran for governor of Georgia in 2018.

After the service, Biden and Bloomberg were set to be joined by fellow candidates Elizabeth Warren, Amy Klobuchar and Pete Buttigieg for the annual march across the Edmund Pettus Bridge to commemorate "Bloody Sunday," when police beat peaceful protesters who were trying to march from Selma to Montgomery.

Congressman John Lewis, who had his skull fractured by police at the March 7, 1965, march as a 25-year-old protester, attended the services Sunday and then the commemoration march. Lewis, who was diagnosed with stage 4 cancer in December, told the crowd Sunday, "I thought I was going to die on this bridge."

"We cannot give up now, we cannot give in," Lewis said. "We must keep the faith, keep our eyes on the prize. We must go out and vote like we've never, ever voted before ... Get in the way. Get in good trouble. And help redeem the soul of America."

Alabama is one of 14 states that will vote on Super Tuesday on March 3. It will be Bloomberg's first time on the ballot, as he skipped the first four early-voting states.