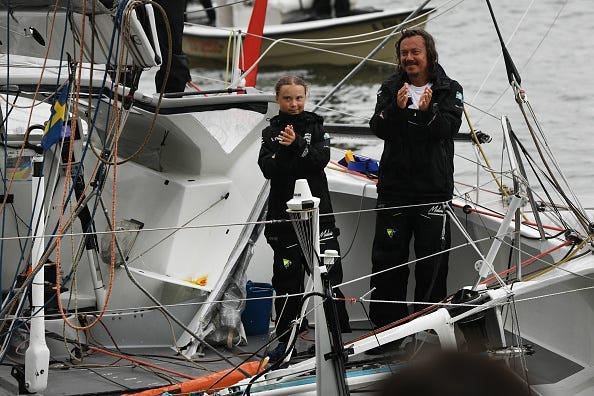 Greta Thunberg's father revealed in a recent interview he was at first "not supportive" of his 16-year-old daughter's climate activism. Svante Thunberg told BBC Radio 4 that he thought it was a "bad idea" for Greta to fight on the "front line" of the battle against climate change, but came around when he saw that her passion for the issue helped lift her out of a depression.

Mr. Thunberg said Greta struggled with depression three or four years before her first school strike for climate change awareness took place. "She stopped talking, she stopped eating... she stopped going to school," he told the BBC, adding it was the "ultimate nightmare for a parent."

The family went to doctors for help and Greta was diagnosed with Asperger's, on the autism spectrum. Earlier this year, the teen opened up to "CBS This Morning" about her diagnosis, saying that in some ways the condition gives her an advantage.

Over the next few years, the problem of climate change became her passion. But her father was not at first supportive of her taking an active role in fighting the crisis. He told the BBC his daughter confronted him about the issue.

The Thunbergs identify as "very active" human rights activists, and Greta called them "huge hypocrites," for not supporting her activism. "Greta said: 'Whose human rights are you standing up for?' since we were not taking this climate issue seriously," Mr. Thunberg told the BBC. That spurred them to make changes.

Her mother decided not to travel by airplane anymore, and her father became vegan and also accompanied Greta on her zero-emissions sailing expeditions to U.N. climate summits. "I did all these things, I knew they were the right thing to do... but I didn't do it to save the climate, I did it to save my child," he said.

While his daughter is much happier now that she has become an activist, he still worries about the "hate" she faces, he said.

Since her first school strike against climate change outside Sweden's parliament, Greta has inspired millions of supporters to rally in more than 150 countries. However, she still receives negative comments about her looks, clothes, behavior and differences, she told BBC earlier this year.

Svante Thunberg told the BBC that he is especially worried about "the fake news, all the things that people try to fabricate [about] her — the hate that that generates." However, the teen deals with criticism "incredibly well," he said.

"You think she's not ordinary now because she's special, and she's very famous, and all these things. But to me she's now an ordinary child — she can do all the things like other people can," he said, adding Greta "dances around, she laughs a lot, we have a lot of fun — and she's in a very good place."

Mr. Thunberg thinks Greta wants to return to school and he hopes things become "less intense" for his family. However, Greta, who was named Time's Person of the Year earlier this month, will turn 17 soon and she won't need a parent to accompany her during her travels around the world.

Her father said if she needs him, he'll go with her — but he thinks she'll become more and more independent and do it by herself.