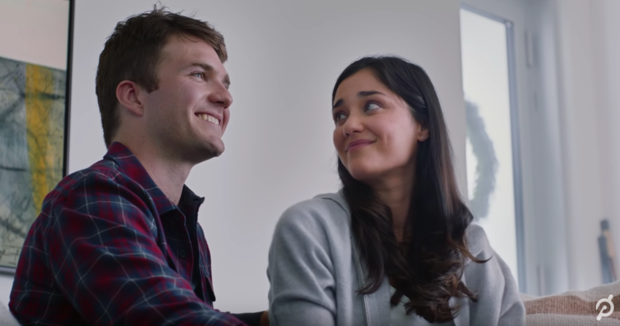 It's a tough job to strike the right balance of relatable and aspirational in advertising. The internet seems to think high-end fitness equipment manufacturer Peloton failed to walk that line with a TV ad that shows a woman walking down the stairs of her home, hands over her eyes, to discover that her spouse has given her the gift of a Peloton bicycle for Christmas.

Social media users quickly criticized Peloton for supposedly peddling negative body images and proliferating unhealthy marital dynamics. At one point in the ad, the woman looks at her husband in a way that suggests she's seeking his approval of her efforts.

Social media comments seemed to delight in attacking Peloton by parodying the ad. One Twitter user even suggested running for president "on the single issue platform to jail everyone involved in the pitching, scripting, acting, shooting, and approval of the Peloton ad."

"Look, I don't want to be 'The Peloton Ad Guy' anymore, but the newest commercial about the vlogging 116 lb woman's YEARLONG fitness journey to becoming a 112 lb woman who says 'I didn't realize how much this would change me' is just ri-god-damn-diculous. Come on," said Clue Heywood, who has used his Twitter account to mock the company's branding and advertising in the past.

Others on Twitter suggested that the man's gift to his spouse implied that he wanted her to lose weight. "Absolutely 100% chance that the husband in the Peloton ad is abusive," Allahpundit tweeted.

But not everyone saw saw the ad in the same harsh light.

"There are a lot of micro-sensitivities around stereotyping men, too, and just because he bought his wife a bicycle as a gift doesn't mean it's about weight loss," said Shelley Zalis, CEO of The Female Quotient and co-founder of the #SeeHer campaign to accurately portray women in media. "There were no references at all to weight loss and it didn't seem like she needed to lose weight. It was about health and wellness."

Other experts also challenged the assumed connection between fitness for the sole purpose of weight loss.

Casting a heavier model would likely have landed Peloton in even hotter water, according to Calkins.

At least one Twitter user also defended the company's decision to cast an already fit model, saying that the spot's aim was to promote a healthy lifestyle — not to encourage weight loss.

Still, there are ways in which Peloton's buzziest ad to-date could have been less provocative, marketing experts said.

"A lot of people are upset partly because the imagery is so upscale and idealized. There's always a delicate balance for a brand between being aspirational and being unrealistic and going too far, and this one is so idealized," Calkins said.

Another way around the backlash could have been to position the Peloton bike as a gift to oneself — for those who can afford the pricey piece of gym equipment. Peloton's stationary bike retails for $2,245.

It's unclear if Peloton worked with an outside advertising agency or if it produced the TV spot in-house. Peloton did not return a request for comment from CBS News.

Others were simply unfazed by the ad and it's message, saying it promoted the product in a relatively standard way.

"Unpopular opinion: the Peloton ad is pretty much just a normal commercial for an exercise bike and the collective freak out over it is way weirded and creepier than the ad itself," Matt Walsh tweeted.

Still, it has the internet buzz. Spoofs of the commercial have surfaced, including one in which a woman serves her husband divorce papers at the end of her cycling journey.

when my husband gets me a Peleton for Christmas ........ pic.twitter.com/Z2d3ewMhPu

It remains to be seen whether or not the ad will have any kind of impact on Peloton's sales throughout the all-important holiday season.

"Peloton's new ad missed the mark, and social commentary (e.g. YouTube reactions, Twitter) is largely negative," said Raymond James analyst Justin Patterson. "However, we do not believe this does much to affect holiday sales."

Backlash against past advertisements that were critiqued for being aimed exclusively at the wealthy have not hurt the company, according to Raymond James.