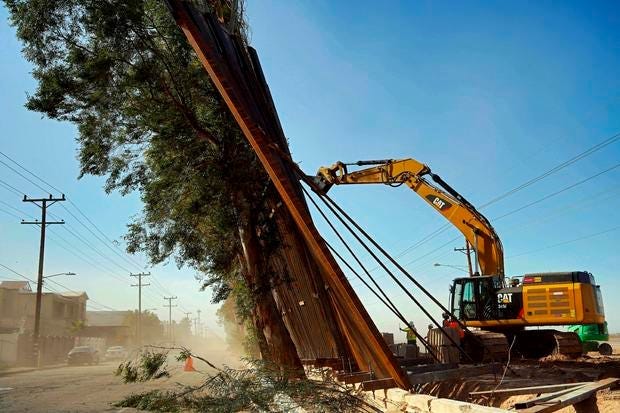 A new section of border wall between the U.S. and Mexico fell over amid high winds on Wednesday, U.S. Customs and Border Protection said. A portion of the wall in Calexico, California landed on the Mexican side of the border in Mexicali.

U.S. Customs and Border Protection spokesperson Ralph DeSio told CBS News that high winds "impacted" a handful of newly constructed panels. No one was hurt as a result of the collapse.

"No property damage or injuries were sustained during this uncommon event while the concrete was drying and construction remains ongoing," DeSio said. According to the National Weather Service, wind gusts reached up 30 miles per hour around the time of the fall.

"The border wall system is imperative to securing the border and is what border patrol agents have asked for and need to maintain operational control of the southern border," he added.

News agencies captured video of the wall tilting over toward the Mexicali side, as trees held it back from completely falling over. The portion of the wall runs about 130 feet in length, local television station KYMA reported.

The Los Angeles Times reports the wall is part of a project to replace 11 miles of border barrier in the area. Earlier this month, a federal appeals court in Louisiana ruled the government can use $3.6 billion in military funds to construct border barriers along the U.S.-Mexico border.