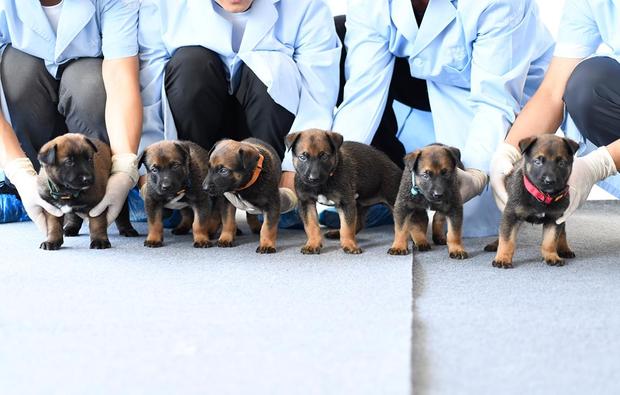 Beijing — The police force in China's capital welcomed six new recruits this week at a special ceremony. The young officers were decked out with shiny new badges, uniforms — and collars. They're dogs, and they were all cloned.

The six animals were the result of cooperation between the Beijing Municipal Bureau of Public Security's Police Dog Base and Sinogene, a private pet-cloning company also based in the Chinese capital.
CBS

Four of the dogs were born in the same litter in August. Their DNA is more than 99% identical to the two donor dogs, a pair of Belgian Malinois carefully selected by the base for their stellar performance on the police force.

Police officer Ma Jinlei, who is in charge of the "Police Dog Precision Breeding Core Technology Research Program," said even outstanding police dogs lose some of their abilities as they grow older, so finding a way to pass on those traits became an important objective for the dog base.

The cloning program is aimed at creating a K-9 force of capable animals with greater efficiency and to help shorten the training period, according to local media.

These aren't the first of their kind; in March Sinogene announced the birth of Kunxun, who they dubbed the "Sherlock Holmes of police dogs." At the time the company said it hoped to quickly ramp up to "volume production" of the cloned K-9s.

Just eight months later the six new animals were welcomed to training. The cloned dogs obviously look the same, and according to the police they also have very similar temperaments, abilities to learn commands and interests in exploring their environment.

The police dog base said it would monitor the cloned recruits closely during their training.

Meanwhile, the police force's batch-cloning research continues apace, with the goal of establishing a gene bank to take advantage of modern technology and help Beijing's police build a guaranteed K-9 force for the future.