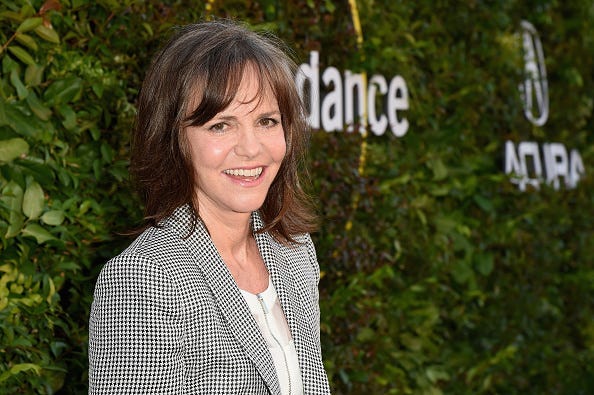 Jane Fonda continued her weekly tradition of protesting on the steps of the U.S. Capitol Friday. This time, actress Sally Field was there. She left the event with Capitol police, and in handcuffs.

Field, along with environmentalist Winona LaDuke, urged people to get out of their comfort zones to fight the climate crisis. "Time to get out and scream loud, 'cause if you don't do it, nobody else will," she said ahead of the protest.

The protests are centered around a different theme ever week. On Friday they focused on jobs, communities and just transitions from fossil fuel-based industries to a clean energy economy.

"I am a mother, I am a grandmother, the time is now," Field said during a speech. "We cannot sit back in our comfort zones, on our couches and wonder, 'What can we do?' We can get out, we can do something."

This is a possibility that is actually happening, we need to get out of our comfort zones now! - @sally_field #firedrillfriday pic.twitter.com/1qNEfRfn12

Footage from the Fire Drill Fridays Twitter account shows crowds cheering as Field is taken from the steps of the Capitol by police. She appeared to be in good spirits, smiling and holding her wrists in the air.

Eva Malecki, a spokeswoman for the Capitol police, told CBS News that 26 people were taken into custody for allegedly unlawfully demonstrating. All were charged with crowding and obstructing or incommoding, Malecki said.

"Transforming our industrial base and energy systems can and will create millions of good jobs, but we must ensure that they guarantee workers a living wage, a union wage, full benefits, a safe workplace, and that they have a say in designing and full rights to collective bargaining," Fonda said during the rally.

Fonda moved to Washington earlier this year to urge for action on climate change. She said she is willing to show up and get arrested every week until January.

Thank you to @sally_field who was just arrested on the US Capitol steps with #FireDrillFriday taking action demanding a just transition! pic.twitter.com/T54vKME0Ve

The first "Fire Drill Friday" took place on October 11. That was also the first day Fonda was arrested for demonstrating on the U.S. Capitol steps.