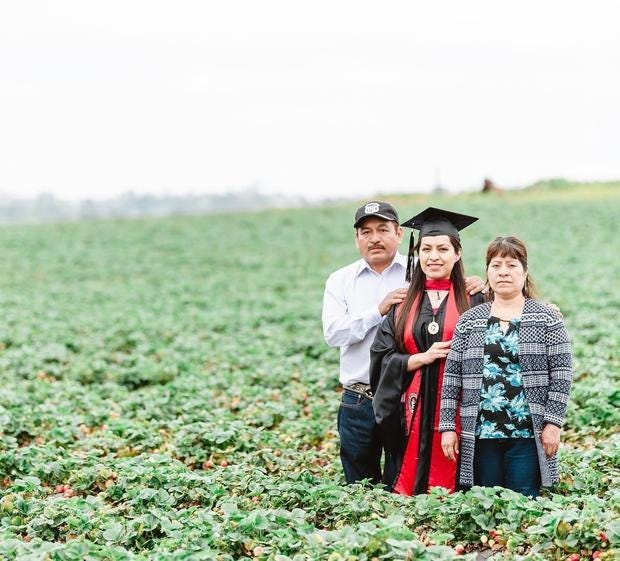 A woman who just graduated with her Master's degree celebrated the accomplishment by honoring the people who helped her get there – her parents, who immigrated to the U.S. from Mexico and worked in fruit fields to give their children a better life. Erica A. Alfaro posed for a photo with her parents in the very fruit fields they had worked. She wore her cap and gown for the special graduation photo that has gone viral.

"Con mucho cariño le dedico mi Maestría a mis papas. Sus sacrificios de venir a este país para darnos un mejor futuro si valió la pena," Alfaro wrote in the original caption to the photo. "With much love, I dedicate my Master's degree to my parents. Their sacrifice of coming to this country to give us a better future was worth it."

Alfaro graduated from San Diego State University this month with a Master's in Education, CBS San Diego reports. She dreams of becoming a school counselor, a far cry from her original job: working in tomato fields.

When she was just 14 years old, her mother took her and her siblings to the fields to work during the summer. "When I told my mother that I was tired, she said, 'This is our life. The only people that have a good life are those that have a good education,'" Alfaro told CBS San Diego.

While her parents did not have a formal education and could barely read or write, they always encouraged their children to pursue education. Alfaro was the first in her family to graduate college, her brother followed in 2012 and her sister is not far behind.

Alfaro said she wanted to mark her new milestone by honoring the sacrifices her parents made.

"My mom cried when I showed her my cap and gown for the first time," the graduate said. "[She> told me that her sacrifices were worth it. That all those hours in the fields were worth it."

Alfaro's parents met as teenagers working in the fields of Fresno. Her siblings were born there, but they lived in Tijuana while their mom obtained residency to the U.S. Their father received residency during "la amnistia" of 1989, CBS San Diego reports.

The Alfaro siblings commuted over the border to San Ysidro Middle School in San Diego. In 2003, they were able to permanently move from Mexico to California.

Alfaro's mom still works between tomato, strawberry raspberry and blueberry fields, depending on the season. Her dad now works for a landscaping company. Their daughter wanted to take her graduation photos in the fields to shine a light on the importance of education.

"My goal is to encourage underrepresented students to continue with their education," Alfaro said. "I also want to help domestic violence survivors and teenage mothers. I hope they can get inspired with my story."