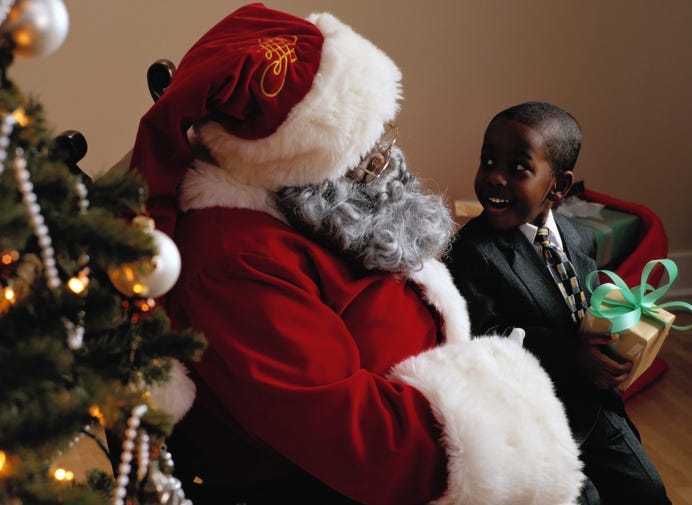 Black parents looking to take their kids to a Santa Claus who looks like them can now turn to technology for help, thanks to a Texas mom who developed an app after several years of struggling to find a St. Nick her twin sons could relate to.

Citing studies that show that children with a positive attitude about their own racial identity do better in school and are less likely to engage in risky behavior, Jihan Woods launched a Kickstarter campaign to fund her black Santas locator app. After raising $5,000 in 30 days, the Dallas psychiatrist developed an app that lists Santas in 35 states and Washington, D.C., and is available in the App store and Google Play.

"I really wanted my children to see a Santa Claus that looks like them. It's important to me that they experience diversity in all aspects of their lives, Santa included," Woods states on the website devoted to the free app.

Available just ahead of the holidays last year, Woods' app came a year after the Ravenel Agency developed a black Santa app to let children video chat with an African-American Santa Claus.

The idea of having a racially diverse concept of the beloved figure that children are taught resides in the North Pole has stirred controversy. Last week, a black Santa riding in a parade in St. Cloud, Florida, drew some verbal sparring on social media. And in 2013 then-Fox News anchor Megyn Kelly created waves by proclaiming Santa to be white.

When it was reported in 2016 that the largest mall in the U.S. would be hiring Larry Jefferson as its first black Santa, the Minneapolis Star Tribune turned off the comment section of its website due to racist remarks. The stirrup also had actor George Takei adding his voice to the mix, noting that "in our internment camp, he was Asian."

But like any good Santa, Jefferson's focus is on the kids, and he said children of color enjoy seeing a Santa who looks like them.

Watching people meltdown over a Black Santa in the Mall of America. "Santa is white!" Well, in our internment camp he was Asian. So there.

"It gives them something to identity with, but Santa is still just Santa," Jefferson told a local CBS affiliate. "I was doing an event, and one child said, 'Santa, you're brown,' and I said, 'Yes, I am, but Santa comes in many different colors.' He said, 'Oh,' so I gave him a candy cane, he ran off with other kids."