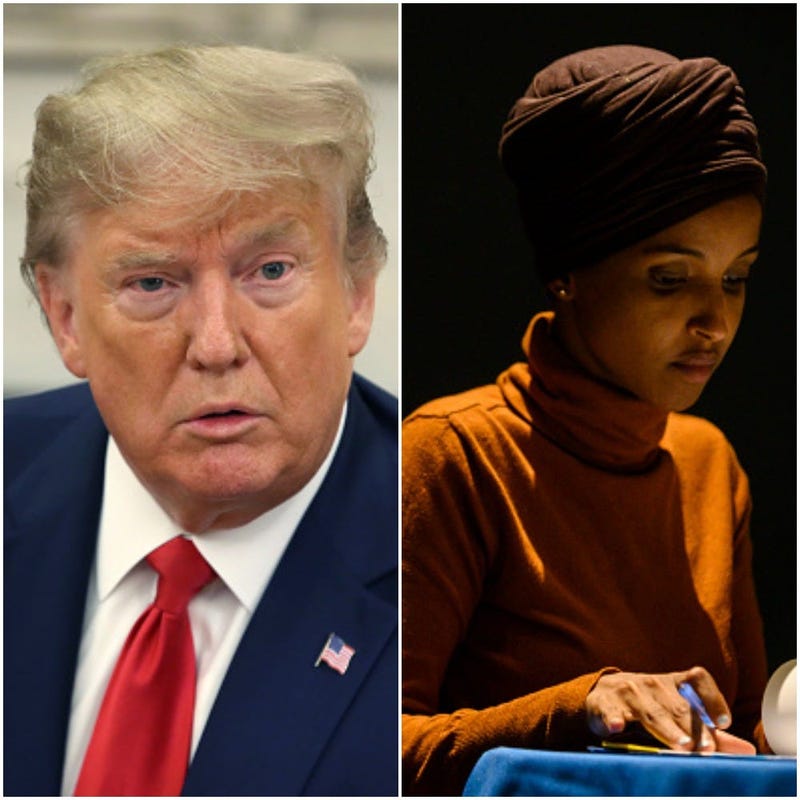 President Donald Trump on Wednesday used Twitter to share an edited video made by a conservative comedian that falsely accused Democratic Rep. Ilhan Omar of dancing and partying last week on the 18th anniversary of the 9/11 terrorist attacks.

The inaccurate video provoked new Twitter criticism of the Muslim congresswoman from Minnesota, who has regularly faced accusations from her critics that she is unpatriotic. Omar's supporters, meanwhile, rallied around her. Some called for Twitter to scrub the misleading content from its site, fearing the video could lead to attacks against the congresswoman.

This is from a CBC event we hosted this weekend to celebrate black women in Congress.The President of the United States is continuing to spread lies that put my life at risk.What is Twitter doing to combat this misinformation? https://t.co/XdkRVrU7mZ

"The President of the United States is continuing to spread lies that put my life at risk," Omar wrote on Twitter. "What is Twitter doing to combat this misinformation?"

She was the second well-known politician in recent weeks to demand the tech giant stop the spread of misinformation. Earlier this month, Democratic presidential candidate Beto O'Rourke's campaign criticized Twitter for failing to act after social media users promoted a baseless claim that a mass shooter was among the former congressman's supporters.

The video of Omar dancing to popstar singer Lizzo's "Truth Hurts" was taken Friday at an event celebrating Omar and four other congresswomen, according to Adam Green, co-founder of the Progressive Change Campaign Committee, who originally shared the clip to his Twitter account that evening. Omar also shared the video that day to her Twitter account.

Can someone name something better than @IlhanMN dancing to @lizzo? Because I can’t think of anything. #CBC2019 #CBCWeek #cbcweekend pic.twitter.com/KvsCRvgKQX

"I never thought that a video taken on 9/13 would be linked to 9/11 and used as one more racist smear" against Omar, Green said of the false tweet that followed.

In the video retweeted by Trump, comedian Terrence K. Williams showed the clip of Omar dancing and added: "I need to talk to Omar. Girl, what in the world were you celebrating on the anniversary of 9/11?"

When Trump shared the video with his 64 million Twitter followers, he tweeted, in part, "The new face of the Democrat Party!"

Social media users quickly pointed out that the video had been taken on Friday, two days after the anniversary, while Omar was attending events related to the Congressional Black Caucus Foundation Legislative Conference in Washington. Others called for Twitter to remove the tweet or suspend Williams' account.

Hours after Trump retweeted Williams' video, the original tweet was removed. The video was deleted by the user, and Twitter did not take action on the tweet, the tech company said in an email. The president's tweet remains live, although without the video, and users have continued to respond.

Williams responded Wednesday to a request for comment by expressing his support for the president. He did not comment on the video or why he took it down.

Trump has used his Twitter account to spread misinformation from Williams before. In August, Trump shared another one of Williams' videos, which disputed, without evidence, that the late financier Jeffrey Epstein committed suicide while in federal custody.