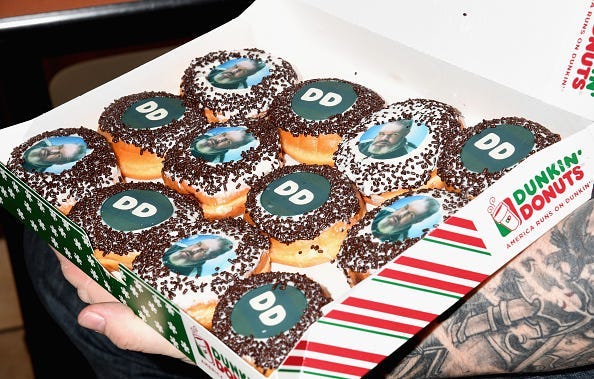 When minutes matter, Dunkin's drive-thru line is the fastest way to grab a bite, new research shows. And the slowest? That title goes to Chick-fil-A, recently dubbed America's favorite fast-food.

It takes an average of roughly 216 seconds to get from the speaker for placing an order to the pick-up window at Dunkin, compared with 322 seconds at Chick-fil-A, according to a study from QSR Magazine.

The food industry trade publication conducted based its findings on more than 1,500 visits to 10 fast-food chains across the U.S. at different times during the day between June 1 and August 1.

Wendy's was the second-quickest, at a little more than 230 seconds. McDonald's — the world's biggest fast-food chain — was the second-slowest at 283 seconds, a wait time the company may address in part with its acquisition last month of Apprente, an ordering-technology startup.

Overall, consumers spend an average of 255 seconds waiting for food in a drive-thru line. That's about 20 seconds slower than last year, according to the findings. QSR noted the difficulty for restaurants of trying to keep pace as menus become more complicated. Another factor is that drive-thrus are getting more congested as growing numbers of customers pick up mobile orders.

Although time is clearly a factor when it comes to fast food, waiting another minute or two for a meal doesn't seem to be hurting Chick-fil-A — consumers recently ranked the chain as its favorite fast-food chain, topping In-N-Out.