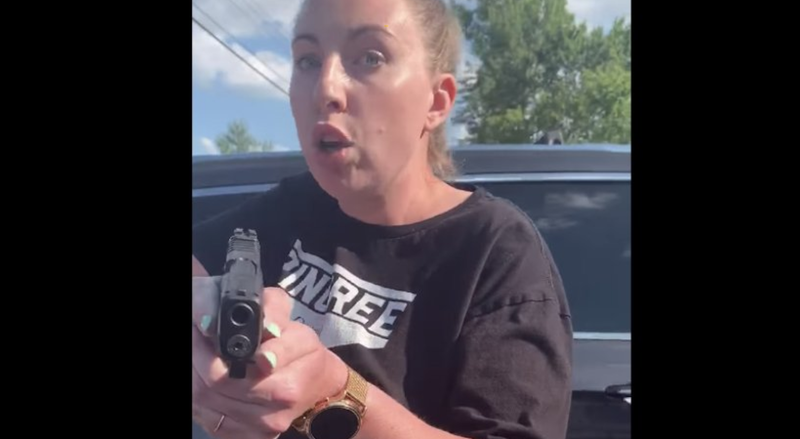 July 3, 2020 07/03/2020 12:02 pm
A White couple in Michigan was arrested Thursday after video showed the woman pointing a gun at a Black mother and her daughters in a restaurant parking lot, authorities said. Jillian Wuestenberg, 32, and Eric Wuestenberg, 42, have been charged with felonious assault, CBS Detroit and The Associated Press said.

We need to identify who this lady is because this is ridiculous. You just pull a gun out on unarmed people anytime you have a disagreement? This isn't the Wild West. This happened in Auburn Hills Michigan. #VoteBlueToSaveAmerica #VoteOutTheGOPCowards pic.twitter.com/b02kXbF2O5

The video, which has been viewed nearly 13 million times, shows the White woman shouting "Get the f*** back" while pointing her gun at the woman filming the incident, who urges others to call police. It's unclear what sparked the confrontation outside a Chipotle in Orion Township, but officials said they are investigating.

A longer YouTube video of the encounter shows both parties shouting and cursing at each other and trading accusations before Wuestenberg apparently returned from her vehicle with the gun.

The mother, Takelia Hill, told The Detroit News her daughter was bumped by the white woman. The video doesn't show how the incident started, but Hill said her daughter claimed the woman became combative when she asked for an apology.

"I walked up on the woman yelling at my daughter," Hill told the newspaper. "She couldn't see me because her back was to me, but she was in my daughter's face."

At one point in the video, Hill or her daughter can be heard calling the couple "very racist and ignorant" and repeatedly daring Eric Wuestenberg to "do something." "You cannot just walk around calling White people racist," his wife responds. "White people aren't racist. No one's racist. I care about you."

Jessica Cooper, the county prosecutor, announced the charges against the Wuestenbergs Thursday afternoon. "It is an unfortunate set of circumstances that tempers run high over, basically, not much of an incident," Cooper told The Associated Press.

In his news conference, Bouchard reflected on tense times nationwide. "We see situations where the tension is very quick," he said. "People are on edge and there's a quick acceleration to anger and sometimes physical violence. ... My plea is please let us all try to be that voice of calm in the storm and remember each one of us is a human being that deserves respect. ... It's very sad for me to see what's going on across communities and across this country."