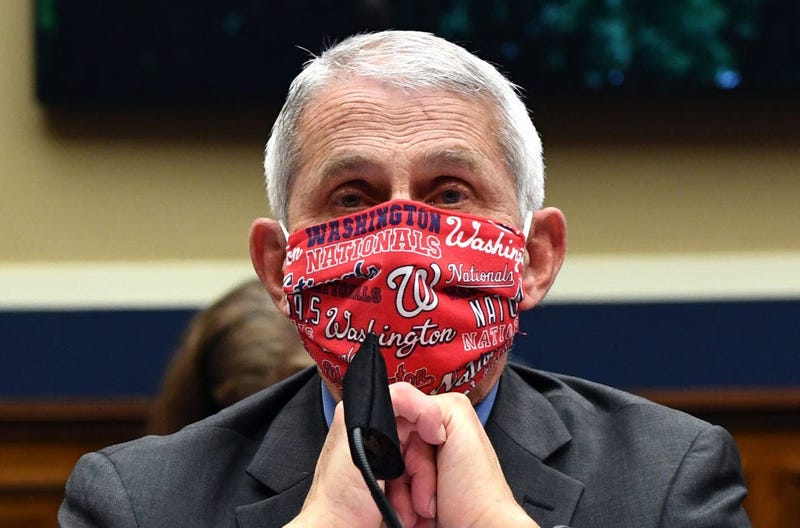 Washington — As the nation confronts a surge in coronavirus infections across the South and parts of the West, tensions between the White House and Dr. Anthony Fauci, a highly respected and leading expert on infectious diseases, have burst into public view amid competing assessments of the country's response to the crisis.

The efforts to discredit Fauci, the director of the National Institute of Allergy and Infectious Diseases, reached a fever pitch in recent days as top White House officials criticized his statements on the coronavirus in the early days of the pandemic, suggesting he has been wrong on numerous occasions.

"Dr. Fauci has a good bedside manner with the public but he has been wrong about everything I have ever interacted with him on," White House trade adviser Peter Navarro told CBS News, before listing instances where he and Fauci diverged on how best to respond to the pandemic. "Now Fauci is saying that a falling mortality rate doesn't matter, when it is the single most important statistic to help guide the pace of our economic reopening. So when you ask me if I listen to Dr. Fauci's advice, my answer is only with caution."

The attempts to undercut Fauci, who polling shows remains trusted by most Americans, come as coronavirus infections are spiking in more than three dozen states and hospitalizations continue to rise. As a result of the latest surge in new cases, some governors have halted phased reopenings of their economies and reimposed restrictions designed to mitigate the spread of the coronavirus.

But President Trump has lauded his administration's handling of the pandemic and attributes the rise in coronavirus cases to increased testing, even as the percentage of tests that come back positive rises in hotspots. With the November election drawing closer, the president continues to push for a reopening of the country and is pressuring schools to prepare for in-person learning in the fall, even as local officials work to adopt hybrid models that aim to protect students and staff from getting infected.

In an interview last week with Greta Van Susteren, chief national political analyst for Gray Television, the president pushed back on Fauci's view that the country is "knee deep" in the first wave of the pandemic and must confront the "serious situation" immediately.

"I think we are in a good place," Mr. Trump said then. "I disagree with him. You know, Dr. Fauci said 'don't wear masks,' and now he says 'wear them.' And you know, he's said numerous things. 'Don't close off China. Don't ban China.' And I did it anyway. I sort of didn't listen to my experts and I banned China."

He also told Fox News host Sean Hannity in a separate interview Fauci "is a nice man, but he's made a lot of mistakes."

Mr. Trump on Monday shared a tweet from game show host Chuck Woolery suggesting "everyone is lying" about the coronavirus, including the Centers for Disease Control and Prevention.

Fauci was instructed not to attend a press briefing with other members of the White House coronavirus task force at the Department of Education last Wednesday, although he did appear at a task force briefing on Friday.

While the president blamed Fauci for mixed messages on the need for Americans to wear masks, other top administration officials, including Surgeon General Jerome Adams, have likewise offered conflicting recommendations to the public on the effectiveness of masks in protecting against the coronavirus. Adams, who in March said "masks do not work for the general public," said in an interview with "Face the Nation on Sunday that the Trump administration is "trying to correct" its earlier messaging on masks and face coverings and acknowledged it's "very hard to do." Adams wore a mask during the interview, which was conducted remotely.

The rosy picture of the coronavirus crisis painted by the president stands in sharp contrast to the blunt warnings issued by Fauci in recent weeks.

Fauci, who has served under six presidents, told FiveThirtyEight's podcast in an interview that "when you compare us to other countries, I don't think you can say we're doing great. I mean, we're just not."

He also refuted Mr. Trump's assertion that the declining mortality rate indicates success in controlling the coronavirus, saying in an event on Facebook Live with Senator Doug Jones, a Democrat from Alabama, that "it's a false narrative to take comfort in a lower death rate."

"There's so many other things that are very dangerous and bad about this virus," Fauci said. "Don't get yourself into false complacency."

Fauci told the Financial Times he has not briefed Mr. Trump in more than two months and last saw the president in person at the White House on June 2.