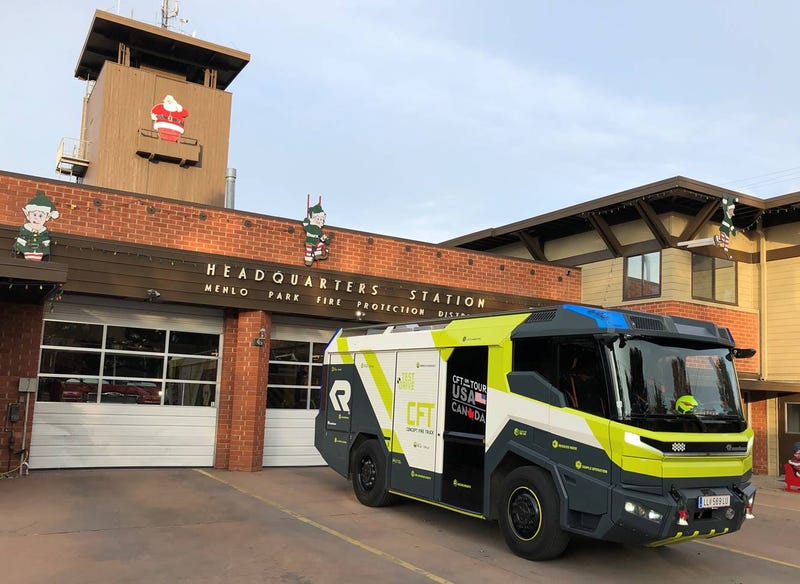 Menlo Park, California — A local fire chief showed off the world's first all-electric fire engine Wednesday evening and announced plans to add one to the department's fleet by the end of 2021, reports CBS San Francisco.

The fire engine, which is black and yellow and looks more like a bus than a typical red fire truck, is made by Austrian company Rosenbauer. The burning question, of course, is whether the fire engine could run out of juice during a call.

It happened to Fremont, California police in September when a Tesla patrol car nearly ran out of power during a chase because someone had forgotten to charge it. The officer was forced to pull back from the pursuit.

"I'm not concerned about that and I'll tell you why -- because we, in the design phase, we'll make sure that we don't have a single point of failure," Schapelhouman said.

Though the fire engine is electric, it uses diesel to fuel the generator for its backup battery. It can run for about eight hours. If the engine is still at a fire scene after eight hours, more diesel can be added to keep the back up power supply running.

Schapelhouman said the plan is to make changes to the truck to fit the department's needs. It'll first be used and tested as a rescue truck before being used to fight fires.

He said the cost of an electric engine is about $1.2 million, which is comparable to a traditional tiller ladder truck. But the electric engine will save the department money in the long run because there's no need for fluids, filters or fuel for it, he said.

Rosenbauer representatives plan to present a drafted contract to the Menlo Park Fire District Board on Thursday on the logistics of purchasing an electric engine. The department would have to put down a $200,000 deposit to get one.

Schapelhouman said the bottom line is that the electric engine is better for the environment and has the potential to be the future of firefighting.