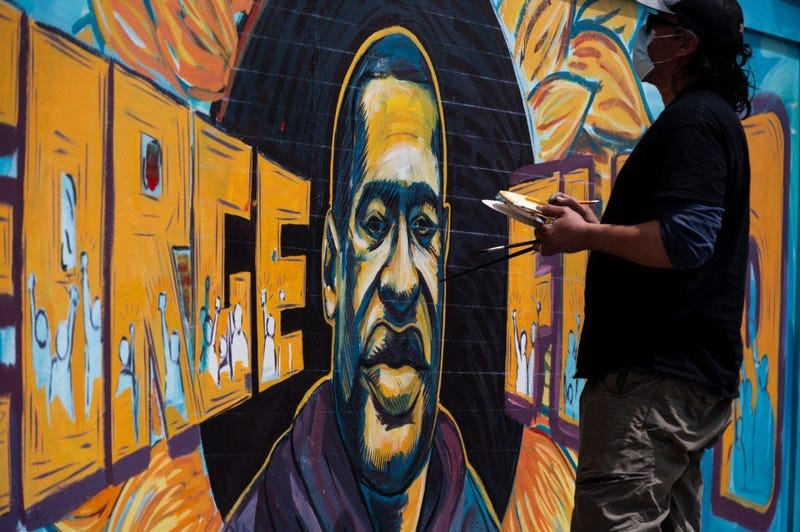 Several high-profile athletes and actors have taken to social media to voice their outrage over the death of George Floyd, a black man whose neck was pinned down by a police officer in Minneapolis. Floyd, 46, died Monday night while in police custody.

Chauvin, a 19-year veteran, had at least a dozen conduct complaints against him.

Several protests have broken out across the country since the video went viral -- turning violent in Minneapolis. A CNN crew was arrested Thursday night, and one man was shot. Protesters have allegedly been looting stores, and a police precinct was set on fire.

According to The Hollywood Reporter, Seth Rogen, Steve Carell, and Ben Schwartz have set up and begun donating to a fund to help bail out Minneapolis protesters.

James' post includes a side-by-side photo of Chauvin kneeling on Floyd's neck next to a photo of Kaepernick kneeling during the anthem, topped with the caption: "This ... ... Is Why." The Los Angeles Lakers star wrote in the post: "Do you understand NOW!!??!!?? Or is it still blurred to you?? #StayWoke"
View this post on Instagram

Viola Davis turned to the gram with the words: "This is what it means to be Black in America. Tried. Convicted. Killed for being Black. We are dictated by hundreds of years of policies that have restricted our very existence and still have to continue to face modern day lynchings. Here's the thing……America will never be great until we can figure out a way for it to work for EVERYBODY!!! "I define connection as the energy that exists between people when they feel seen, heard and valued"……. RIP George Floyd".

Pop star Justin Bieber wrote, "this makes me absolutely sick. This makes me angry this man DIED. This makes me sad. Racism is evil We need to use our voice! Please people. I’m sorry GEORGE FLOYD." And posted the video of Chauvin with his knee on Floyd's neck.

Rapper Cardi B. posted:" Enough is enough! What will it take ? A civil war ? A new president? Violent riots ? It’s tired ! I’m tired ! The country is tired !You don’t put fear in people when you do this you just show how coward YOU ARE ! And how America is really not the land of the free !" Along with a photo of Floyd.

"George Floyd. My grandfather was named George Floyd Garner. I never met him, he died when my father was a boy. I have spoken this name with love my entire life, but now with even more meaning. I see the images of the police officer in Minnesota pinning George Floyd to the ground and think—I bet this same officer would step in to stop someone from kneeling on a dog’s neck. And yet, here he is. My heart breaks. “May God protect me”, sings @keedronbryant. Please God protect him. And please, lead us out of these troubled waters."

Zoe Kravitz posted, "GEORGE FLOYD my heart breaks for you and your family. #policebrutality needs to stop #sayhisname".

GEORGE FLOYD my heart breaks for you and your family. #policebrutality needs to stop. #sayhisname