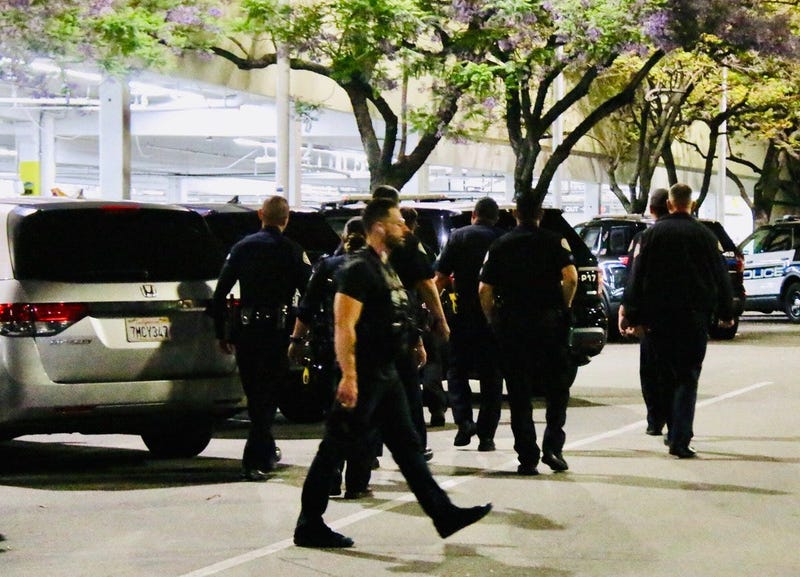 June 4, 2019 06/04/2019 11:21 pm
One person was wounded Monday afternoon in a shooting at the Del Amo Fashion Center mall in Torrance, prompting a massive police response and a lockdown of a nearby school.

Tuesday a SWAT team arrived in Torrence and handcuffed a man outside the Mobil gas station near the mall.

The gunfire was reported just before 3 p.m. at the mall in the 3500 block of West Carson Street, according to Torrance Police Department Sgt. Ronald Harris.

Officers arrived to find one person with a gunshot wound and took that individual, who was expected to survive, to a hospital, Harris said.

The mall was locked down and surrounded by officers and a SWAT team responded to the location, according to Harris.

The suspect left the scene, Harris said, but officers systematically searched the mall for additional possible victims and escorted people from the premises.

"There are no known additional victims at this time," he said.

Detectives initially described the man as a 20- to 25-year-old man with a shaved head and wearing a black shirt and checkered shorts, Harris said.

Video posted on Facebook showed the male shooting victim, who appeared to be bleeding, being cared for by other people inside the mall just north of the food court on the main level, outside a Build-A-Bear Workshop and Finish Line athletic apparel store.

Madrona Middle School, which is located near the mall, was placed on lockdown after the shooting, amid concerns the suspect may have gotten out of the facility and run in the direction of the campus.

The police search of the mall ended about 9:30 p.m., at which point vehicles stranded at the facility were allowed to be driven from the location, Harris said.

I’m an employee at Del Amo Mall. I was present during the shooting. Here’s my recount of what happened, and my thoughts on the situation. pic.twitter.com/UFJjeHoXO7

An employee at Finish Line tells KNX the shooting happened near the store but didn't say more than that.

The store is located on the lower level near the food court.

On scene at Del Amo Mall in Torrance where a shooting took place about an hour ago. Sounds like one victim according to witnesses. Suspect is still at large. pic.twitter.com/wCk9NABGSw