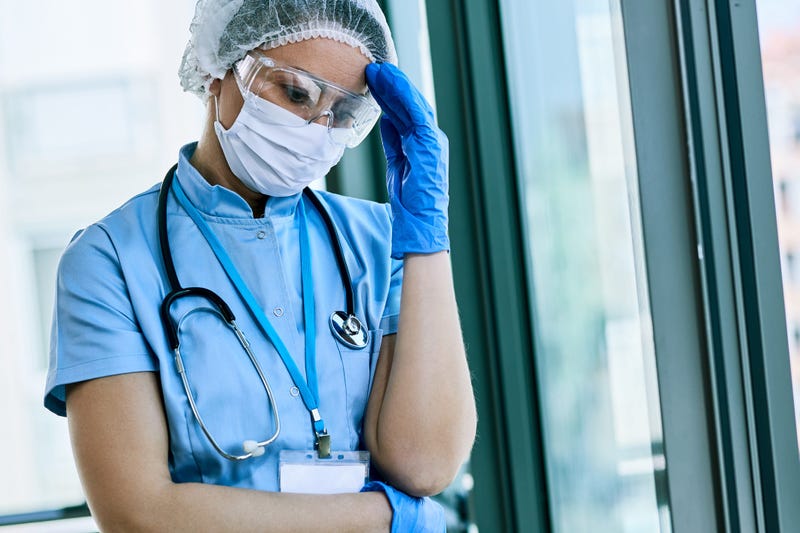 SANTA ANA (CNS) - Local health officials say a skilled nursing facility resident succumbed to COVID-19 in Orange County, raising the death toll to 980.  The county Monday also added 94 more coronavirus diagnoses, raising the cumulative caseload to 48,538, according to the Orange County Health Care Agency.  The rate of county residents testing positive for COVID-19 inched up from 4.8% Sunday to 4.9% Monday but remains below the state's desired threshold of 8%.  Other metrics continued to show improvement, including hospitalization rates, which continued to drop, falling from 329 Sunday to 317 Monday, with the number of intensive care unit patients dipping from 99 to 98.  The county's case rate per 100,000 residents over 14 days dropped from 76.4 to 75.9 but is still well above the California Department of Public Health threshold of 25 per 100,000 residents.  The county has 34% of intensive care unit beds available -- up from 32% Saturday and better than the state's 20% threshold. And the county's hospitals have 62% of their ventilators available, well above the state standard of 25%.  The change in three-day average of hospitalized patients stands at - 12%, much lower than the 10% state standard.  The OCHCA reported that 650,801 COVID-19 tests have been conducted, including 12,916 reported on Monday. There have been 41,286 documented recoveries.  The county falls within the state's new "purple tier" of counties for COVID-19, the worst level, but is on the verge of being upgraded to the next tier of red, Orange County Supervisor Lisa Bartlett said Friday after Gov. Gavin Newsom unveiled the new rating program.  "We are very close based on the last two weeks of data to almost be moving into red," said Bartlett, who is also president of the California State Association of Counties.  County CEO Frank Kim told City News Service on Monday that state officials initially indicated on Friday that Orange County -- if trends continued -- would be allowed to reopen all schools as of Sept. 8 but later said that is not yet set in stone.  Monday was the county's ninth day off the state's monitoring list.  Orange County, along with several other counties that were off the watch list, were initially thought to be grandfathered in under the old system, Kim said. Under the new system, the county would have had to wait another two weeks after moving into another tier.  "There are three different scenarios," Kim said.  If the county can move up to the next level -- the red tier -- then it could that be schools would have to wait another two weeks before reopening for personal instruction. Or the county could get credit for the time spent off the watch list and have to wait another week or schools could reopen by Sept. 8, Kim said.  "I don't think it will be hard to win the argument that we should get credit for days off the list," Kim said, adding the question will be how much longer the county would have to wait.  "We continue to look better, we're making gradual improvements and we expect -- barring anything unusual -- that the trend would remain level and we would be one of the counties permitted to go to tier two, the red tier," Kim said. "We're hopeful the state will give us credit for being off the list before the new criteria was released, but we won't know that until we hear back from the state."  Schools in the county are still able to apply for kindergarten through sixth grade waivers. Most of the waiver applications are coming from secular and other private schools, Kim said.  The new system unveiled Friday by Newsom focuses more on case and positivity rates because of breakthroughs in testing and the ability to get results more quickly, which allows public health professionals to more efficiently quarantine and address hot spots and surges. Before, state officials focused on hospitalization and intensive-care unit beds because they wanted to be prepared for any surges that could hasten more deaths.  "It actually encourages more testing and contact tracing," Bartlett said of the new system.  The new system is also more fair to higher-population counties because the overall case counts were being held against them and now officials are focusing more on present-day case counts, she said.  The state also includes a "seven-day lag" as a failsafe to account for slower laboratories. But the new system also focuses on a third criterion beyond case and positivity rates, and that is still vague, Bartlett said.  "When they define the third criteria more, that should bring more clarity to the counties on how they can operate within the guidelines, and which business sectors can open and to what capacity," Bartlett said.  Hair salons and indoor malls at 25% capacity were allowed to reopen Monday statewide, Bartlett said. If Orange County's trends continue and it makes it into the red tier, then indoor dining, for example, could be added at 25% capacity after next week, she said.