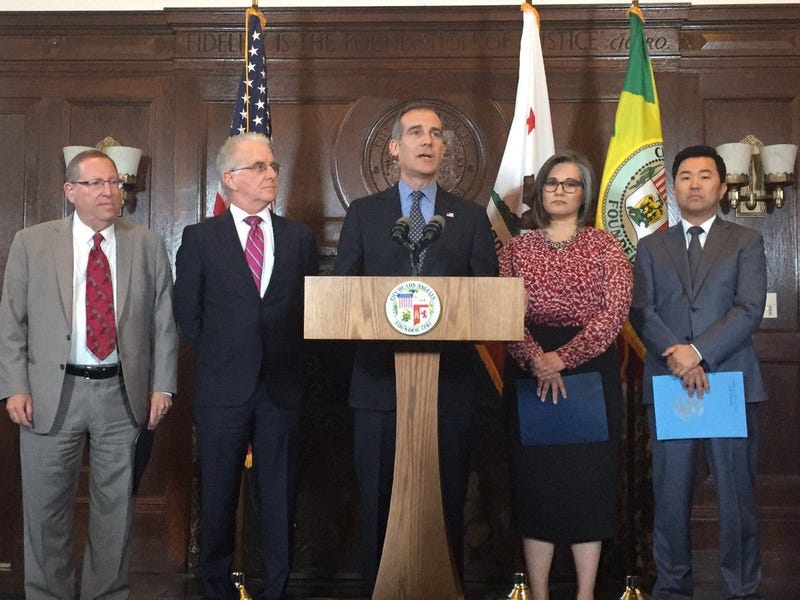 LOS ANGELES - Los Angeles is financially safe and secure, according to Mayor Eric Garcetti and several City Council members who spoke today about the city's budget in the coming fiscal year.

More than $10.6 billion dollars will be spent by the city of Los Angeles from July 1 to June 30 next year.

. @MayorOfLA says these are very good times economically for the city w/ a robust reserve - about 8% of the $10.6B budget. Hear more @KNX1070 pic.twitter.com/lGz88b7qvc

"This is easily the best budget we've seen in 10 years," said Councilman Paul Krekorian, who represents the San Fernando Valley.

Past lessons of fiscal stewardship have been learned was the theme of today's press conference in which Krekorian and the mayor were joined by Councilmembers  David Ryu, Monica Rodriguez and Paul Koretz.

Attributed to the windfall of the funds is a nearly 9% rise in the city's sales-tax revenue over the last year and the creation of more affordable housing, although the takeaway from that is to try to ensure rent prices remain affordable and enable more people are able to contribute to the economy.

In the decade prior, Garcetti said the city's reserves were about half of what they are now.

Krekorian -- who chairs the council's Budget and Finance Committee -- said the city is not out of the woods as far as recovering from the economic downturn experienced nationally in 2009. But since that time, the city has eliminated almost the entirety of its structural deficit and now has "resilience" against economic downturns.

The city's bond ratings also were upgraded a level by both Kroll Bond Rating Agency and Fitch earlier this year, which could help the city secure better rates on infrastructure bonds.

Street maintenance funding will total about $348 million and include "cool" pavement materials that can reduce street temperatures about 25 degrees, Garcetti said the city has recorded.

The spending plan puts more than $457 million toward homeless outreach and services, including syringe-collecting and HIV testing, as well as increased law enforcement at the city's supportive housing complexes and dispatching of two homeless-engagement teams to Skid Row. More than half the funding for the efforts come from the city's Proposition HHH, a bond measure approved by voters in 2016.

Legal counsel will also be funded through federal funds, but the city has yet to formulate and adopt a policy for the services. Krekorian said they have until the end of June when the fiscal year starts to adopt such a policy.

"This will provide legal representation to some folks who are facing unjustified evictions...provides mediation and some gap funding," Koretz said. "One way or another, it's going to be much less expensive to keep people from becoming homeless than to get them off the street."

About $18 million is designated in the budget for four new A Bridge Home sites scheduled to open within the next fiscal year, with another $36 million in federal support funding.

The budget also includes $3 million for the city's Cool Pavement and Trees program, which includes tree trimming and watering services on residential and commercial properties.

Increases to public safety are also proposed, as the budget has 40% more in overtime funding than last year. Other items included investments in more clean energy to meet the city's carbon-neutral goal by 2050.

The Los Angeles City Council on Thursday approved packets of budget items with little fanfare. The council originally saved room for more discussion today, but it was passed before 11 a.m. on Thursday, indicating an amicable finance process this year.

The council is expected to take its final action of approval early next week.