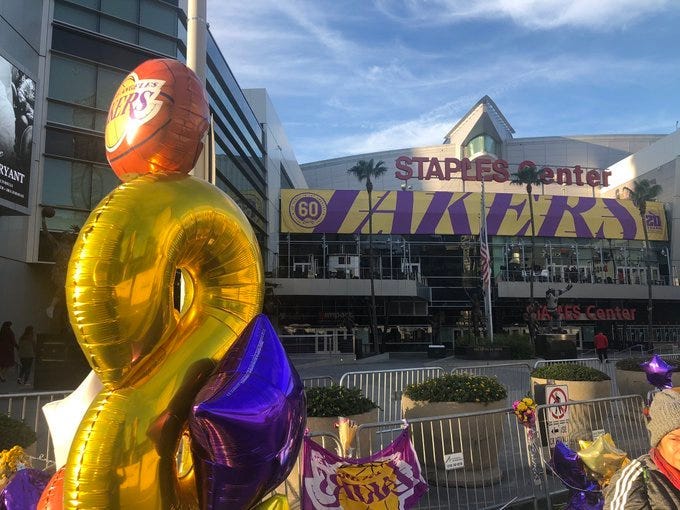 LOS ANGELES (CNS) - The Los Angeles Lakers will seek a return to normalcy tonight when they meet the Portland Trailblazers at Staples Center in their first game since retired Lakers legend Kobe Bryant perished along with his 13-year-old daughter and seven others in a helicopter crash Sunday.

The Lakers have been steadily progressing since the tragedy. They did light work on the court Tuesday before gathering for a luncheon and sharing stories about Bryant, according to the Los Angeles Times. On Wednesday, they started with drills and conducted a light football scrimage. On Thursday, the Lakers (36-10) began preparing in earnest for the Portland Trail Blazers (21- 27).

According to an Instagram post by Trail Blazers forward Carmelo Anthony, Bryant had planned to be at tonight's game.

The Lakers and Clippers were scheduled to play Tuesday, but the Lakers asked that the NBA postpone the game.

People are still having a hard time accepting the death of #KobeBryant. The young man with the basketball arrived on a bus from Las Vegas at 2am...just to be here ...at the growing memorial outside #StaplesCenter. @KNX1070 pic.twitter.com/fCG4kQNXOr

The Lakers plan tributes to Bryant at tonight's game, but Lakers Coach Frank Vogel declined to share what they would be, The Times reported.

Intent on creating their own identity, the Clippers usually cover the Lakers' banners and retired jersey numbers for their home games at Staples Center. But at  the Clippers' game against Sacramento on Thursday -- the first NBA contest to be played in the arena since Bryant's death, the Clippers left Bryant*s retired jerseys uncovered and on display high above the floor.

The rest of the Lakers' championship banners and retired jerseys were covered by the usual images of Clippers players and a city landscape but Bryant's 8 and 24 stood out on a black background. And a moment of silence was observed just past 7:33 p.m.

Fans have left balloons, basketballs, jerseys, cards, stuffed animals and personal notes in his honor on 11th street and on Xbox Plaza at L.A. Live. The mood was respectful and somber late Thursday afternoon, but a few hustlers were selling homemade T shirts and caps, The Times reported.