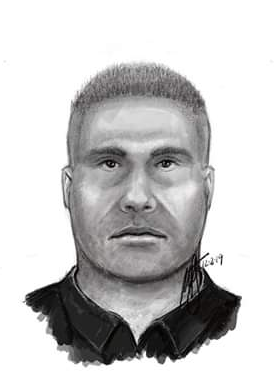 RIVERSIDE (CNS) - A man committed a sexual assault on a woman inside a home in the Sycamore Canyon area of Riverside while her husband was sleeping next to her, and Riverside police asked for public assistance today to help them find and arrest the suspect.

The assault took place about 2:40 a.m. Wednesday at an apartment in the 5800 block of Fair Isle Drive, police said.

Responding officers learned the intruder sneaked into the home and committed the assault on the wife while she slept. The victim then woke up and alerted her husband to the intruder, police said.

The suspect then ran from the apartment. Police searched the area but could not find him.

The suspect was described as Hispanic, around 35 to 40 years old. He was approximately 5-feet-4 inches tall and weighed between 180 and 200 pounds, police reported. He had dark skin and short dark hair, and was last seen wearing dark clothes.

The female victim help police construct a sketch of the suspect.

Anyone with information on this suspect was asked to call Riverside Police Detective Janet Ramos at 951-826-8716, or jramos@riversideca.gov.​