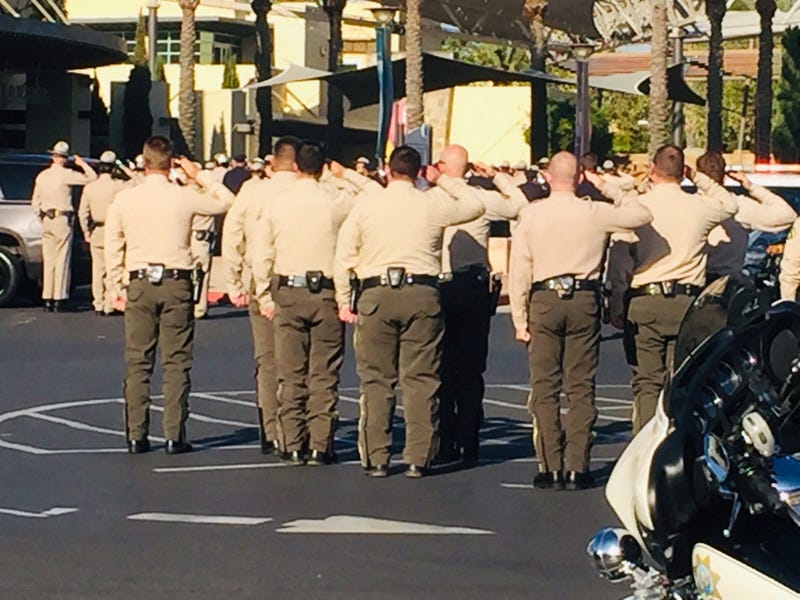 RIVERSIDE (CNS) - A public memorial service is scheduled in Riverside today for the California Highway Patrol officer gunned down by a convicted felon during a traffic stop that turned into a gun battle, leaving two other officers wounded and the gunman dead.

Officer Andre Moye Jr., 34, of Moreno Valley, will be honored by colleagues, friends and family during a 90-minute service set to begin at 10 a.m. at Harvest Christian Fellowship.

Moye's coworkers from the CHP Riverside Area Office, many of his fellow officers from the agency's Inland Division and a large number of other law enforcement officials from throughout the region and state are expected to attend the service, which will be followed by a private burial, according to the CHP.

Temporary street closures will be in effect in the vicinity of the church to accommodate the funeral procession.

Pastor Jeff Lasseigne will preside over the service, which will be livestreamed via Harvest and the CHP.

Harvest was the same location in April where final respects were paid to CHP Sgt. Steve Licon, who was Moye's colleague, and like Moye, was a motor officer. Licon was struck by an alleged drunken driver while working extra duty in Lake Elsinore.

The CHP last week had planned to hold a celebration marking the agency's 90th anniversary, but those plans were canceled following Moye's Aug. 12 death. A solemn end-of-watch ceremony was held instead.

"Officer Moye epitomizes what a CHP officer should always be -- a dedicated and selfless public servant," CHP Commissioner Warren Stanley said during the tribute. "He will not be forgotten."

Moye graduated the CHP Academy in March 2017. He is survived by his wife Sara, father, mother, stepfather, brothers and sisters.

A memorial account has been established for the family at the California Association of Highway Patrolmen Credit Union. Donations are being accepted online at https://cahpcu.org/OfficerAndreMoyeJrMemorialFund .

Aaron Luther, 49, of Beaumont, fatally shot Moye shortly after the motorcycle patrolman and a backup officer in another unit stopped the ex-con for an unspecified traffic violation in the area of Box Springs Boulevard and Eastridge Avenue, just west of Interstate 215, about 5:30 p.m. Aug. 12, according to the Riverside Police Department, which released findings of its preliminary investigation on Friday.

"During that stop, the lone suspect produced a weapon and fired at Officer Moye, severely injuring him," said agency spokesman Officer Ryan Railsback. "The backup CHP officer ... immediately took gunfire from the suspect and returned fire. He called for assistance during the gunfight and was also struck, which caused a critical injury to one of his legs."

Railsback confirmed that multiple CHP officers and Riverside County sheriff's deputies converged on the scene after the distress call went out, engaging Luther, who was armed with a semiautomatic rifle that he had pulled from his GMC pickup.

"The exchange of gunfire between the suspect and law enforcement continued for several minutes, resulting in a third CHP officer being struck," Railsback said. "An RPD officer arrived to the west of the suspect and exchanged gunfire with him. The suspect was severely injured, causing him to stop his attack."

Moye was retrieved by an RPD helicopter crew, who flew him to Riverside University Medical Center in Moreno Valley, where he was pronounced dead minutes later.

The leg-shot CHP officer and the third officer, who suffered superficial wounds, were also taken to the county hospital. The latter was treated and released that night. The officer with the critical wound remains hospitalized but is expected to make a full recovery, according to the CHP.   Railsback said first responders provided treatment to Luther at the scene, but he was pronounced dead on arrival at the medical center.   "His criminal history includes prior prison commitment for attempted murder and assault with a deadly weapon against a peace officer, along with other violent crimes," Railsback said.   A motive for the attack remains unclear, but Luther's father, Dennis Luther, told reporters that he believed his son may have been bent on committing suicide by cop. He said his son was having marital problems as well as financial difficulties, because a knee injury was hampering his ability to do construction work.   According to various media reports, Luther used an AR-15-type "ghost gun" to carry out the attack. Such weapons have no serial numbers, making them untraceable, and are generally assembled from parts obtained separately, usually through online ordering.

sports
Report: Saints could be open to trading Michael Thomas
music
Drew Barrymore resurrects her iconic 'Scream' character in hilarious new skit
music
Arnold Schwarzenegger feels ‘fantastic’ after recovering from heart surgery
sports
Did the Seahawks bait the Bucs into signing Antonio Brown?
news
Which states have the cheapest and most expensive gas in the country?
music
Lifetime reveals schedule for all 30 Christmas 2020 movies