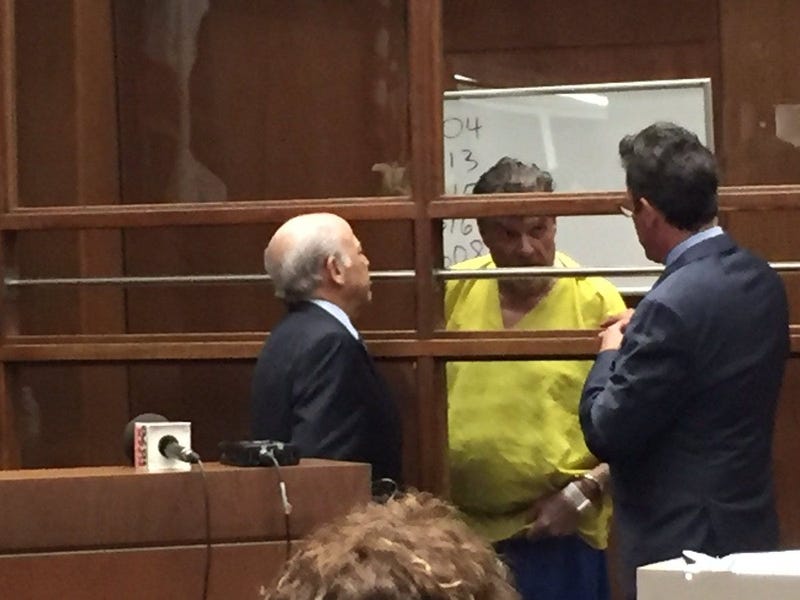 His defense team asked to postpone a bail review hearing until early next week.

A judge will be asked Wednesday morning to lower the bail for a former USC gynecologist who's been charged with sexually assaulting 16 patients while working at the campus.

The lawyer says he'll actually ask to have George Tyndall released on his own recognizance but if the judge won't go for that he'll ask to have the bail cut to $500,000 dollars.

A former USC campus gynecologist accused of sexually abusing hundreds of women under the guise of medical exams pleaded not guilty today to charges of sexually assaulting 16 patients over the course of seven years.

Tyndall, 72, who is being held on more than $2 million bail, is due back in court Wednesday for a bail-review hearing. His attorney said Tyndall is not a flight risk and plans to ask that his bail be reduced.

A brief court appearance for former #USC doctor #DrGeorgeTyndall. He will be back in court next month. Judge would not reduce bail or allow home confinement. @KNX1070 pic.twitter.com/PnqJHFZk2A

A judge ordered that he surrender his passport and not practice medicine, although his attorney said Tyndall's medical license has been inactive since last August.

Tyndall appeared in the downtown Los Angeles courtroom wearing a protective vest, but his attorney said his client is not suicidal and was wearing the vest for his own protection.

Tyndall was arrested Wednesday outside his Mid-Wilshire apartment, Los Angeles Police Department Chief Michel Moore said. Tyndall complained of chest pains after being arrested, and he was taken to a hospital for treatment, but he was moved into the county jail late last week.

— Claudia Peschiutta (@ReporterClaudia) June 26, 2019    Moore also said Tyndall was carrying a .38-caliber revolver when he was arrested. The chief said he does not believe Tyndall has a permit to carry a concealed weapon.

Tyndall is facing up to 53 years in prison if convicted, according to prosecutors, who are recommending that his bail be set at more than $2 million. An arraignment date was not immediately set.

Tyndall's attorney, Andrew Flier, issued a statement last week saying, "After a year of being tried in the press, Dr. Tyndall looks forward to having his case adjudicated in a court of law where the truth will finally prevail. He remains adamant he will then be totally exonerated."

Tyndall has previously denied any wrongdoing, insisting his actions were legitimate medical exams.

Then-USC Interim President Wanda M. Austin said Wednesday the university has been cooperating with the LAPD and District Attorney's Office "and will continue to do so."

"We care deeply about our community and our top priority continues to be the wellbeing of our students, health center patients and university community," she said. "We hope this arrest will be a healing step for former patients and our entire university."

Moore said 12 LAPD detectives have been working full time on the case for the past year, investigating assault allegations by more than 350 women. He said detectives presented more than 130 potential cases to the District Attorney's Office, raising the possibility of more charges being filed.

Hundreds of former patients have sued Tyndall and USC, accusing the university of failing to respond to allegations of abuse by the campus gynecologist dating back decades.

On June 13, a federal judge in Los Angeles gave preliminary approval to a $215 million class-action settlement with some of the women suing the university.

Attorneys for the women included in the settlement said the agreement "gives every single woman who saw Tyndall a choice in how they want to participate and hold USC accountable, while also forcing the school to change to ensure this doesn't happen again."

Austin issued a statement at the time saying the settlement "provides every affected individual the opportunity for a fair and respectful resolution, and it contains additional reforms that will build upon the impactful changes we have already made to strengthen our university."

In a letter sent to the USC community, Austin stressed that the university has "significantly strengthened operations and oversight at the Student Health Center."

"This includes new protocols to ensure any complaints are investigated and resolved by appropriate university officials and authorities," she said. "Additionally, we have hired female, board-certified physicians and introduces groundbreaking patient education materials about sensitive examinations."

Alleged victims have claimed they were inappropriately fondled or photographed by Tyndall under the guise of gynecological exams. Many also accused him of making sexually charged comments during the exams.

U.S. District Judge Stephen V. Wilson set a January hearing to discuss finalizing the settlement, under which Tyndall's former patients each would receive minimum payments of $2,500, in addition to being eligible to claim an award of between $7,500 to $250,000, subject to review by a three-member panel.

Beyond the payments, the settlement requires USC to institute a series of administrative changes, including the creation of a position for "an independent women's health advocate" to ensure complaints about improper sexual or racial conduct are investigated.

USC also must conduct background checks on health center employees that delve into prior history of sexual harassment allegations, in addition to improving staff training and bolstering staffing so that female students have the option of seeing a female doctor.

The class includes as many as 17,000 women seen by Tyndall at the USC Student Health Center between Aug. 14, 1989, and June 21, 2016, whose treatment included an examination of their breast or genital areas by the physician.

Hundreds of other women are still suing the university and Tyndall in state court. Attorneys for those alleged victims have criticized the federal class-action settlement, calling it inadequate.

The lawsuits contend the university received numerous complaints of Tyndall's alleged sexually abusive behavior, dating back to at least 1988, and actively and deliberately concealed his actions. Attorneys for some former patients allege that following an internal investigation of complaints against Tyndall in 2016, the university paid Tyndall a substantial financial settlement so he would quietly resign.

USC officials have denied any coverup.

In an open letter to faculty and staff in May 2018, USC Provost Michael Quick said top administrators did not know about the complaints until 2016.

"It is true that our system failed, but it is important that you know that this claim of a cover-up is patently false," Quick wrote. "We would never knowingly put students in harm's way."

The uproar over the Tyndall allegations, on the heels of other misconduct cases involving different campus doctors, ultimately led USC President C.L. Max Nikias to step down.

.@LAPDChiefMoore says Tyndall was armed when he was arrested this morning. Tyndall hasn’t been booked because he complained of chest pains and was taken to the hospital. @KNX1070 https://t.co/fB8Q5M8Qlp