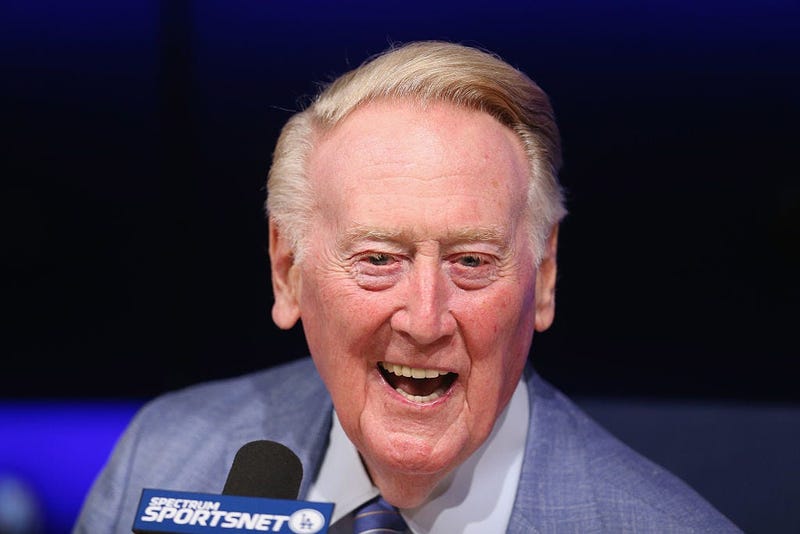 LOS ANGELES (CNS) - Legendary Dodgers broadcaster Vin Scully will auction off his personal collection today, highlighting a live internet auction featuring over 600 lots of vintage and modern baseball memorabilia.   The Hunt Auctions Live Internet Auction was originally slated to take place live in Los Angeles as part of the company's 16th annual MLB All-Star Game auction event but will now be conducted as a live online auction due to coronavirus-related constraints.   A portion of the Vin Scully Collection proceeds will benefit Neuromuscular Research at UCLA.   "For 67 years, I have been blessed to have fulfilled a childhood dream of broadcasting baseball," Scully said. "My journey began in Brooklyn with the likes of Duke Snider and Jackie Robinson and finished with Kirk Gibson and Clayton Kershaw in Los Angeles. The sport has given a redheaded kid playing stickball in the streets of New York even more than he had nerve to pray for and allows my wife Sandi and me to contribute some assistance to Neuromuscular Research at UCLA to which my family is proud to support.   "This auction contains pieces of my life and dreams as well as baseball memories. Here's hoping they will be enjoyed by many."   The items from Scully's collection include:   -- 1988 Los Angeles Dodgers World Championship ring (estimated at $100,000-$300,000)   -- 1955 Brooklyn Dodgers World Championship ring (est. $75,000-$150,000)   -- 1963 Los Angeles Dodgers World Championship ring (est. $50,000-$100,000)   -- 1981 Los Angeles Dodgers World Championship ring (est. $15,000-$25,000)   -- 1981 Los Angeles Dodgers World Series presentational trophy (est. $15,000-$25,000)   -- "Dodgers Centennial" limited edition serigraph with hand-painted Vin Scully by LeRoy Neiman (est. $25,000-$50,000)   -- 2016 Los Angeles Dodgers scorebook from Scully's final MLB season (est. $10,000-$15,000)   -- President Ronald Reagan single signed baseball to Vin Scully (est. $5,000-$10,000)   "Vin Scully is one of the most iconic figures in baseball history," Hunt Auctions President David Hunt said. "Vin's ability to make you feel as part of the game itself, part of a family, and with an uncommon humility was his unique genius. The honor to associate with Vin Scully for this very special offering is without question one of the most significant in our 30-year company history."   Scully spent 67 seasons as the Dodgers' broadcaster, retiring after the 2016 season.   Online pre-bidding ended at 7 p.m. Tuesday, but final live bidding for all items will begin at 11 a.m. Wednesday.   To participate in the live event, bidders must register by emailing info@huntauctions.com or calling 610-524-0822.   The auction also features items from the Green Diamond Gallery Collection, including a 1966 Don Drysdale Los Angeles Dodgers professional model road jersey estimated between $30,000 and $50,000.   Additionally, items will be auctioned from the personal collection of Cincinnati Reds shortstop and Hall of Famer Barry Larkin, including a-2002-03 Kobe Bryant autographed Los Angeles Lakers professional model jersey estimated between $5,000 and $10,000.