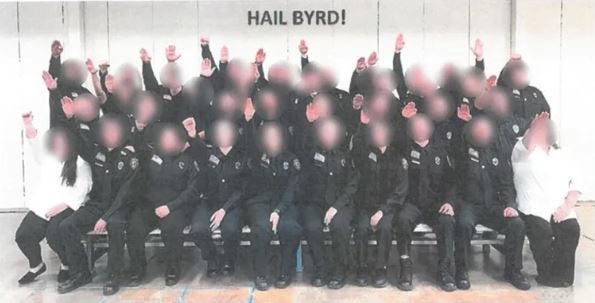 As of Monday, all of the West Virginia cadets who participated in what appeared to be a Nazi salute have been fired.

According to NBC News, West Virginia Governor Jim Justice approved the recommendation to fire the correctional officer cadets, who were captured in a class photo posing with their arms raised and hands extended. The words "Hail Byrd!" can be seen at the top of the photo, referring to their instructor whose last name is Byrd.

The photo was initially released December 6, and within days following its discovery, two academy trainers and a cadet were fired -- 34 others were suspended without pay.

An investigation was conducted by the department and its Division of Corrections and Rehabilitation. It was explained that the salute was "simply a greeting," and a "sign of respect," according to a report.

"Instructor Byrd," has claimed she was unaware of the historic significance of the gesture. Byrd told a member of her staff that students wrote the words "Hail Byrd," because "I"m a hard-ass like Hitler."

The report maintains that the cadets were in essence following instructions from Byrd for fear of being disciplined.

Gov. Justice released a statement condemning the photo and thanking the department for investigating the incident.

“As I said from the beginning, I condemn the photo of Basic Training Class 18 in the strongest possible terms. I also said that this act needed to result in real consequences – terminations and dismissals. This kind of behavior will not be tolerated on my watch in any agency of State government.

“We have a lot of good people in our Department of Military Affairs and Public Safety. But this incident was completely unacceptable. Now, we must continue to move forward and work diligently to make sure nothing like this ever happens again.”