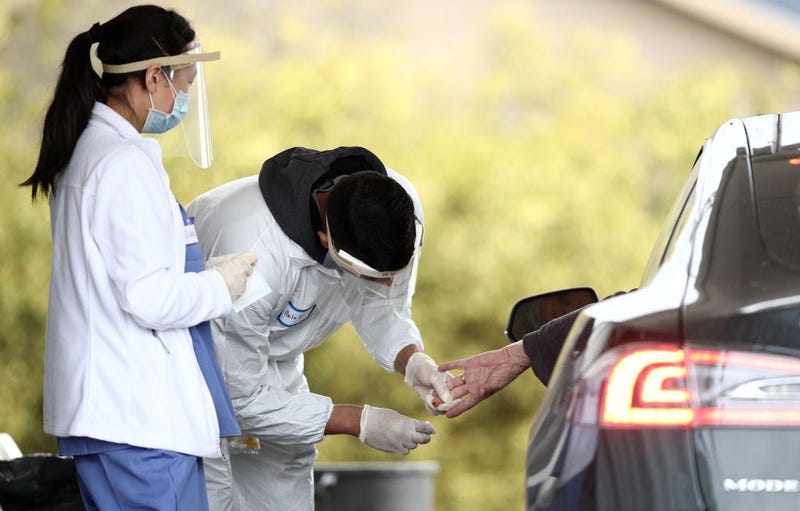 Gov. Newsom addresses California having the most COVID-19 cases in the nation.

California has more than 400,000 cases but the death rate in New York is more than California. Gov. Newsom addressed the increase in cases on Wednesday saying "it is a sober reminder of why we are taking things as seriously as we are."

He said it's a reminder of why the state mask mandate went into place in June and closures of indoor dining at restaurants and other business sectors. He said today, California is reporting 127,000 people were tested and yesterday there were 12,807 people who tested positive for COVID-19 in the last 24 hours - the highest reported number in California. He said California also reported 115 deaths.

There are now 35 counties out of the 58 total counties are on the state monitoring list, according to Newsom.

He said over a 7-day period the state has averaged 90 lives lost compared to 98 lives in the previous 7 days. He said the positivity rate is continuing to go up "modestly."

Newsom reminded everyone "of the magnitude of impact this virus continues to have."

Newsom said the positivity rate for 14 day period has remained steady at 7.4 percent but the week-long rate is now 7.6 percent today.

"That is cause for some concern, each decimal point is, what I would argue, is a significant increase in the positivity rate," Newsom said.

He also gave an update on the procurement of PPE in the state. Newsom appeared in a briefing in a warehouse in Sacramento on Wednesday where many of the N95 masks, gowns, gloves, sanitation equipment are housed.

He said 46 million mask units per month are being used in the state.

He said he wants to make sure masks are going to the frontline workers.

Newsom said the state has procured 193 units of surgical masks out of 200 million have already arrived in the state and the state has been able to procure roughly 146 million N95 masks already and 150 million more N95 masks that will be coming in the next few weeks.

"We need to go big and go bold in our procurement," Newsom said.

In the past few weeks, Newsom released also released new guidelines for barbershops and hair salons to operate outdoors in a safe environment Monday. Previously, Newsom has ordered the closure of fitness centers, houses of worship, hair and nail salons, barbershops in those counties on the state monitoring list last week, which includes LA County and other counties across the state.

He reminded what was closed statewide - indoor operations at dine-in restaurants, wineries, movie theaters, zoos, bars including outdoors -  and what was closed in certain counties on the state monitoring list including gyms, shopping malls and places of worship.

Newsom ordered the closure of schools for in-person classes for those Calfornia counties that are on the state monitoring list which is now more than 30 counties. Newsom said schools can physically reopen when its county has been off the monitoring list for 14 consecutive days. Schools that don't meet this requirement must begin the year with distance learning, according to Newsom.

Newsom said the schools in those counties on the watch list can't reopen in-person school until they are off the state monitoring list for two weeks straight unless the district superintendent requests a waiver from the county health officer, which may be granted. They will shift to distance learning in more than 30 counties. That includes Los Angeles County, Riverside, San Bernardino, Orange County and Ventura County and counties up north like Alameda County, Marin County, Monterey and Napa.

Both LAUSD and San Diego School District have already announced that their school year will start online and school campuses will remain closed. LAUSD starts Aug. 18.