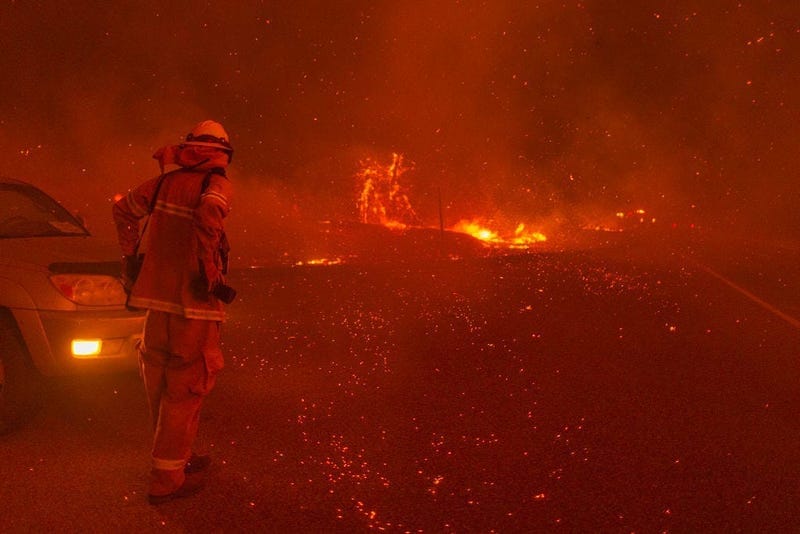 Gov. Newsom gives an update after a Labor Day that saw triple-digit heat and numerous massive fires cropped up across the state.

Newsom said there is an investigation into the cause of the El Dorado Fire adding that 90 percent of the fires in the state are "man-made."

"It appears to be an example of another fire that was not Mother Nature but man-made," he said.

Earlier this month, Newsom announced a state of emergency due to the wildfires.

When it came to actions that California took to conserve energy he said a heat emergency proclamation to shift to energy consumption.

In SoCal, the Bobcat Fire has issued some evacuations for Monrovia residents and is now more than 8,000 acres and 0 percent containment.

In the state, the Creek Fire saw more than 200 people rescued by helicopter and power was shut off to 172,000 customers to try to prevent more blazes over Labor Day weekend.

"California has already set a record with 2 million acres (809,000 hectares) burned this year, and the worst part of the wildfire season is just beginning," an Associated Press story reported.

An angry, impassioned @GavinNewsom says "I have no patience, I say this lovingly…for climate change deniers," noting "these extreme events that are now becoming almost normalized" and devastating California on an annual basis. #ClimateChange #CaliforniaFires #wildfires

Newsom on Tuesday said hospitalizations have dropped 24 percent over the last two weeks.

He said the county movement is determined by case rate and test positivity.

Newsom announced new reopening guidelines - again - for the counties in the state and this time it's color-coded and in tiers.

Dr. Mark Ghaly on Tuesday said it's been about two weeks now with the new framework. He said a county will remain in a tier for at least three weeks and will only move to the next tier if they'v emet the next threshhold for two consecutive weeks.

Now there are 33 counties in Purple, 14 in Red, 9 counties in Orange and 2 in Yellow. Amador, Orange, Placer, Santa Clara and Santa Cruz counties can move to the Red tier, according to Ghaly on Tuesday.

Newsom said the blueprint for a safer economy will be statewide, simple, slow, and stringent. The four tiers will be:

red - substantial where some non-essential indoor businesses operations are closed

orange - moderate where some business operations are open with modifications.

yellow - minimal where most business operations are open with modifications.

The new assessments will begin every Tuesday beginning Sept. 8.

There is a part of the website that will be live shortly to check on businesses by sector, by county: https://covid19.ca.gov/safer-economy/

He said the purple risk level is the old monitoring state watch list including more than 30 counties that were placed on that list. He said that means more than 7 new daily new cases per 100,000.

In the red tier it is "substantial spread or positivity rates that are 5 to 8 percent."

He said orange is moderate and yellow is minimum where you have less than 1 daily new case per 100,000.

Meet the metrics for the next tier for two straight weeks.

Counties can only move one tier at a time

REQUIREMENTS TO MOVE BACK

Dr. Mark Ghaly said on Friday counties are going to be slow-moving through this. He said if a county is assigned a tier they should expect to be in that tier "for at least three weeks."

He said for example for zoos, museums - they are still only allowed to do outdoor only with modifications IF you are in the purple widespread tier.

WHAT IS CLOSED IN CA AGAIN?

Newsom announced a new approach and partnership in an effort to disrupt the COVID-19 testing market to bring down costs and improve reliability and access to everybody in terms of getting more tests.

He said the state is currently conducting an average of roughly 100,000 tests per day and the turn-around time is up to a week.

The average cost of a molecular diagnostic test is $150-$200, he said adding the state is partnering with PerkinElmer to build a new lab in the state with a full supply chain.

He said with this partnership, California is adding up to additional 150,000 diagnostic tests per day. He said tests will have a 24 to 48 hour guaranteed turn-around time.