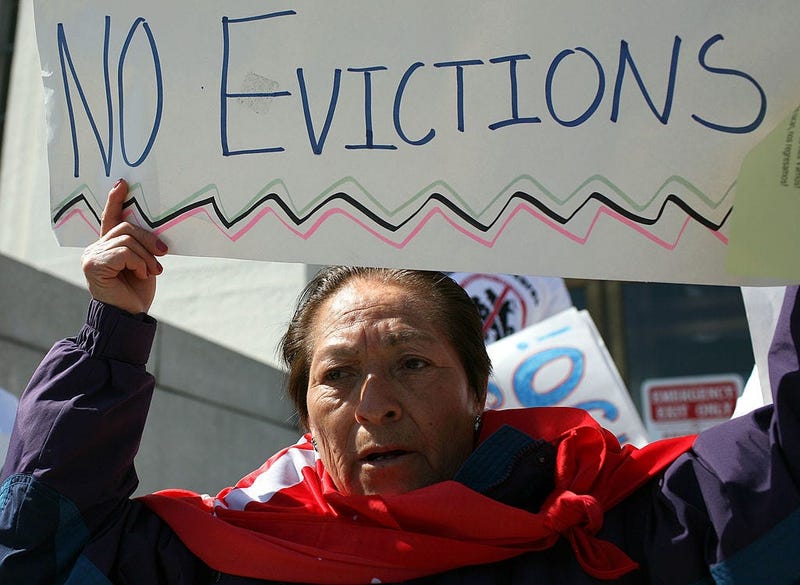 LOS ANGELES (CNS) - An October hearing is set in which Southern California's largest landlord organization will urge a federal judge to put an immediate halt to the city's eviction ban and rent freeze enacted during the COVID-19 pandemic.  The Apartment Association of Greater Los Angeles filed a lawsuit against the city of Los Angeles in June challenging the eviction ban, prohibitions on late fees or interest, and moratorium on annual rent increases.  In a motion filed Monday, AAGLA is seeking an emergency order to immediately invalidate the eviction ban and rent freeze. A hearing is scheduled Oct. 19 in Los Angeles federal court to hear arguments.  "The city's eviction ban goes way overboard in providing benefits to renters at the expense of all landlords, particularly the small `mom and pop' landlords making up the majority of housing providers within the city," said Earle Vaughan, AAGLA's board president. "Many of the renters that have benefited under these ordinances have not been impacted during the pandemic and yet still choose not to pay rent. As a result, the city has exposed itself to significant liability risk for damages associated with the eviction ban, and in particular, damages stemming from the lack of an `end date' on the eviction ban and prohibition on rent increases, which now seven months following their establishment is still a date unknown."  Despite rules aimed at preventing evictions, at least 365,000 renter households in the county are at high risk of being removed from their homes due to the COVID-19 economic recession, according to a recent UCLA study.  On Sept. 1, the Los Angeles County Board of Supervisors extended a moratorium on evictions through Oct. 31.  The lawsuit alleges the city's "unconstitutional and overreaching abuse of power" has forced landlords to absorb the economic losses suffered by their tenants because of the pandemic.  "We are requesting that the court invalidate the city's eviction moratorium and related measures which prohibit landlords from evicting tenants who would otherwise be subject to eviction for defaulting on the payment of their rent or another significant violation under their rental agreement," said plaintiffs' attorney Douglas J. Dennington.

news
Teachers use Bitmoji classrooms to reach students online
news
Is it safe to sit in the middle seat on an airplane?
sports
Top fantasy football waiver wire pickups for Week 8
news
2020 election: How to find your polling location
sports
Rob Manfred on MLB's $8.3 billion debt: another year without fans 'going to be difficult'
news
Amy Coney Barrett sworn in as Supreme Court Justice at White House ceremony