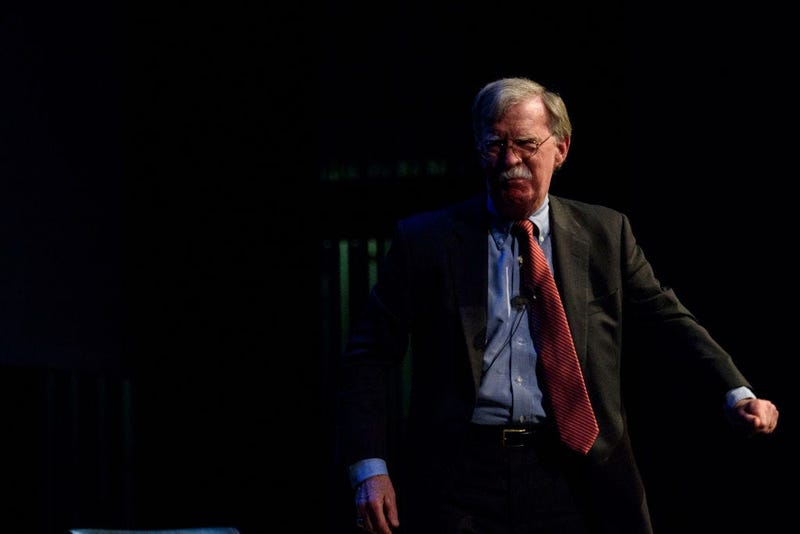 Bolton's new book "The Room Where It Happened: A White House Memoir" had already generated chatter prior to its publication - and ire from President Trump who has called it "exceedingly tedious" on Twitter. The book alleges, among other things, that Trump asked the Chinese government to help him with his re-election.

In a June 17 tweet, President Trump wrote "Wacko John Bolton’s “exceedingly tedious”(New York Times) book is made up of lies & fake stories. Said all good about me, in print, until the day I fired him. A disgruntled boring fool who only wanted to go to war. Never had a clue, was ostracized & happily dumped. What a dope!"

"No president comes to the office with a 360-degree knowledge of every single issue they are going to have to face. There is no doubt about it. Everybody brings their own experience. What's key though is the willingness to learn about things that were not part of your experience before you joined the government. In Donald Trump's case, since he had never been in the government before, there was a lot to learn," Bolton said.

LISTEN TO THE INTERVIEW BELOW

When it comes to recent news of Russian intelligence offering bounties to Taliban militants on American soldiers in Afghanistan, Trump has said it is a "hoax."

According to an Associated Press story, "top officials in the White House were aware in early 2019 of classified intelligence indicating Russia was secretly offering bounties to the Taliban for the deaths of Americans, a full year earlier than has been previously reported."

Bolton talked about the dilemma the U.S. finds itself in when it comes to the COVID-19 pandemic. Bolton said in January U.S. officials and departments were raising concern over what was happening in China when it came to the virus.

"...He didn't want to hear about the negative impact on the Chinese economy that might disrupt the trade negotiations," Bolton says. "And he particularly didn't want to hear the risk of what we have seen since then and the disastrous effect it has had on our economy which he saw as hurting his chances for re-election."

Bolton said "not getting the country ready and not speeding up the government at full speed to anticipate what may come cost us valuable time that had had the obvious impact of not having adequate preparation."

Bolton told Feldman and Simpson that "Russia, China, perhaps Iran, North Korea" might try to meddle in the November election.

A few weeks ago, the Department of Justice filed a suit to block the new book's publication, with an NPR story reporting "the publication and release of The Room Where it Happened would cause irreparable harm, because the disclosure of instances of classified information in the manuscript reasonably could be expected to cause serious damage, or exceptionally grave damage, to the national security of the United States.""

However, last month a federal judge denied the Trump administration's attempt to block the publication, according to a CNN story.

Wacko John Bolton’s “exceedingly tedious”(New York Times) book is made up of lies & fake stories. Said all good about me, in print, until the day I fired him. A disgruntled boring fool who only wanted to go to war. Never had a clue, was ostracized & happily dumped. What a dope!

The Russia Bounty story is just another made up by Fake News tale that is told only to damage me and the Republican Party. The secret source probably does not even exist, just like the story itself. If the discredited @nytimes has a source, reveal it. Just another HOAX!