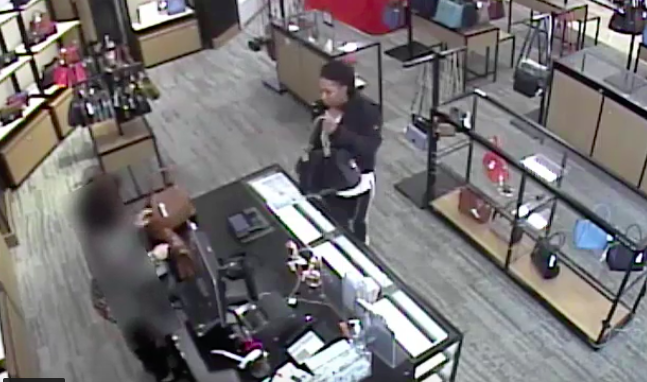 The LAPD needs help in finding a female suspect who is accused of allegedly stealing a person's wallet from her purse in a restaurant in Sherman Oaks.

The theft was on Jan. 14. The department said in a press release that the suspect used the credit cards from the wallet to make purchases at three different retail locations in Van Nuys, Northridge, and Pacoima.

There was also a diamond ring that was also stolen -- from inside the wallet.

The suspect entered the restaurant and sat behind the victim and allegedly reached into her purse, which was hanging from the back of the chair.LAPD said in a press release: "In one of the videos the suspect is wearing the victim's ring on her right hand. Partial video shows the suspect possibly drives an unknown white mid-size four door sedan."

LAPD said in a press release that the suspect is a female, Black, 25-35 years of age, with the lower half of her hair dyed pink, dark jacket, black white tights, and brown boots.

Anyone with additional information about this case or knows the identity of the suspect is asked to contact The Los Angeles Police Department's Van Nuys Division Theft Detectives, at 818-374-0040.