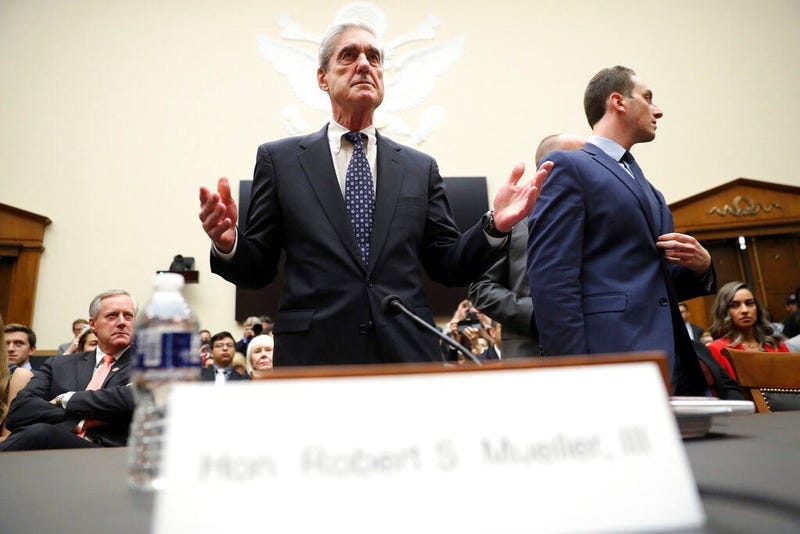 (KNX 1070 AM) -- Former special counsel Robert Mueller is affirming that a president can be charged with crimes after leaving office.

He says Justice Department guidelines prevented him from considering charges against President Donald Trump while he is in office.

Because of the longtime Justice Department guidance that a sitting president cannot be indicted, Mueller says "one of the tools a prosecutor would use is not there."

Mueller has said his investigators could not exonerate Trump on obstruction of justice. His report said they did not find sufficient evidence to establish charges of criminal conspiracy between the Trump campaign and Russia.

Mueller is testifying Wednesday before the House Judiciary Committee about his Russia investigation.

Donald Trump Jr. is calling the hearing a "disaster" for Democrats. He says Mueller claims he can't understand the Republicans' questions, but totally gets the ones from Democrats.

Eric Trump says GOP Rep. Jim Jordan's comments at the hearing were "spot on." Jordan says Democrats should be investigating what he says are "false accusations" that started the Russia probe.

That's a phrase people say after they think they've gotten the upper hand on something.

Mueller is disputing President Donald Trump's claim that Mueller was rebuffed in a bid to fill the post of FBI director.

Facing questions from congressional lawmakers, Mueller said he spoke with Trump about the FBI job before he was named as special counsel, but "not as a candidate."

Then-White House chief strategist Steve Bannon has said that while the White House invited Mueller to speak to the president about the FBI and thought about asking him to become director again, Mueller did not come in looking for a job.

Trump tweeted Wednesday that there are "numerous witnesses," including Vice President Mike Pence, who could say that Mueller applied and interviewed for the job and was "turned down" for it.

Pence spokesperson Alyssa Farah told the Associated Press that the vice president "was present in the Oval Office when Robert Mueller interviewed for the job of FBI Director in May of 2017."

Mueller is testifying before Congress for the first time on his Trump-Russia investigation.

Former special counsel Robert Mueller on Wednesday dismissed President Donald Trump's claims that his investigation had exonerated the president of obstructing his probe into Russia's efforts to help Trump win the 2016 election.

"The president was not exculpated for the acts that he allegedly committed," Mueller declared at the opening of congressional hearings into his investigation.

He described the Russian government's efforts to interfere in American politics as among the most serious challenges to democracy he had encountered in his decades-long career, which included steering the FBI after the Sept. 11 terrorist attacks.

The televised Capitol Hill appearance, Mueller's first since wrapping his two-year Russia probe last spring, unfolded at a moment of deep divisions in Congress and the country, with many Americans hardened in their opinions about the success of Donald Trump's presidency and whether impeachment proceedings are necessary. It was unclear whether hours of testimony will shape public opinion about Trump's acts.

Rep. Zoe Lofgren: Did your investigation find that the Russian government perceived it would benefit from one of the candidates winning?Mueller: Yes.Lofgren: And which candidate would that be? Mueller: Well, it would be Trump. #MuellerHearings https://t.co/pjOwNhYtbJ pic.twitter.com/xEG3271QOR

Democrats hoped his testimony would weaken Trump's reelection prospects in ways that Mueller's book-length report did not. They hope that even if his testimony doesn't inspire impeachment demands — House Speaker Nancy Pelosi has made clear she will not pursue impeachment, for now —Mueller could nonetheless unambiguously spell out questionable, norm-shattering actions by the president.

Nadler: Under Department of Justice policy, the president could be prosecuted for obstruction of justice crimes after he leaves office, correct? Mueller: True.#MuellerHearings https://t.co/pjOwNhYtbJ pic.twitter.com/7GZnddGjUr

Republicans, by contrast, immediately defended Trump and criticized the Democrats for continuing to go after him. They highlighted Mueller's conclusion of insufficient evidence to establish a criminal conspiracy between the Trump campaign and Russia.

"Those are the facts of the Mueller report. Russia meddled in the 2016 election," said Rep. Doug Collins, the top Republican on the House Judiciary Committee. "The president did not conspire with Russians. Nothing we hear today will change those facts."

Mueller frequently gave terse, one-word answers to lawmakers' questions, and referred back to the wording in his report. He at times appeared stilted and halting, and several times asked for questions to be repeated.

Pressed as to why he hadn't investigated a "dossier" of claims that the Republicans insist helped lead to the start of the probe, he said that was not his charge.

That was "outside my purview," he said repeatedly.

Though Mueller declared at the outset that he would be limited in what he would say, the hearings nonetheless carry the extraordinary spectacle of a prosecutor discussing in public a criminal investigation he conducted into a sitting U.S. president.

Mueller, known for his taciturn nature, warned that he would not stray beyond what's already been revealed in his report. And the Justice Department instructed Mueller to stay strictly within those parameters, giving him a formal directive to point to if he faces questions he does not want to answer.

On Tuesday, Democrats on the House judiciary and intelligence committees granted his request to have his top aide in the investigation, Aaron Zebley, sit at the table with him. Zebley is not expected to be sworn in for questioning by the judiciary panel. But he will be able to answer questions before the intelligence committee, where, a committee aide said, he will be sworn in. The aide was not authorized to discuss the hearing preparations publicly and requested anonymity.

Trump lashed out early Wednesday ahead of the hearing, saying on Twitter that "Democrats and others" are trying to fabricate a crime and pin it on "a very innocent President."

"Why didn't Robert Mueller investigate the investigators?" Trump said in his tweet.

So why didn’t the highly conflicted Robert Mueller investigate how and why Crooked Hillary Clinton deleted and acid washed 33,000 Emails immediately AFTER getting a SUBPOENA from the United States Congress? She must have GREAT lawyers!

Trump has made Mueller a regular target of attack over the past two years in an attempt to undermine his credibility and portray him as biased and compromised.

Over the last week, Trump began to frequently ask confidants how he thought the hearing would go, and while he expressed no worry that Mueller would reveal anything damaging, he was irritated that the former special counsel was being given the national stage, according to two Republicans close to the White House. They were not authorized to speak publicly about private conversations.

Long aware of the power of televised images, Trump seethed to one adviser that he was annoyed Democrats would be given a tool to ramp up their investigations — and that the cable news networks would now have new footage of Mueller to play endlessly on loop in an effort to embarrass the White House.

Trump this week feigned indifference to Mueller's testimony, telling reporters in the Oval Office on Monday, "I'm not going to be watching — probably — maybe I'll see a little bit of it."

A former FBI director who spent 12 years parrying questions from lawmakers at oversight hearings, and decades before that as a prosecutor who asked questions of his own, Mueller resisted efforts to goad him into saying anything he did not want to say. He repeatedly told lawmakers to refer to his report for answers to specific questions.

Wednesday's first hearing before the Judiciary Committee focused on whether the president illegally obstructed justice by attempting to seize control of Mueller's investigation.

The special counsel examined nearly a dozen episodes, including Trump's firing of FBI Director James Comey and his efforts to have Mueller himself removed. Mueller in his report ultimately declined to state whether the president broke the law, saying such a judgment would be unfair in light of Justice Department legal opinions that bar the indictment of a sitting president.

The afternoon hearing before the House intelligence committee will dive into ties between the Trump campaign and the Kremlin.

On that question, Mueller's report documented a trail of contacts between Russians and Trump associates — including a Trump Tower meeting at which the president's eldest son expected to receive dirt on Democrat Hillary Clinton — but the special counsel found insufficient evidence of a criminal conspiracy aiming to tip the 2016 election.