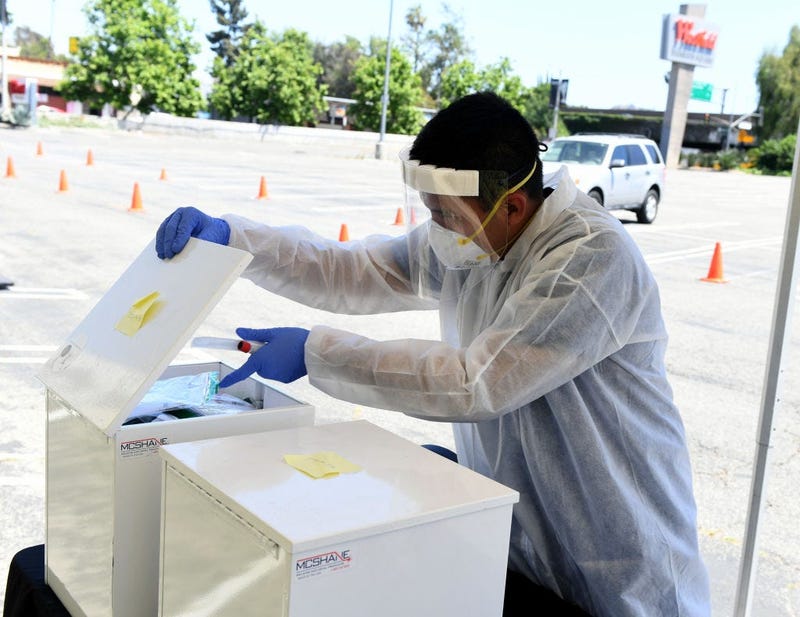 Gov. Newsom addressed the glitch in the state's electronic lab reporting system Monday and other economic impacts of COVID-19 including the recent order by President Trump on new unemployment benefits.

Newsom's updates on the economic impact of COVID-19 come as the state's public health officer and director of the Department of Public Health abruptly resigned late Sunday. Dr. Sonia Angell was appointed in October.

Newsom said he tries not to have personnel discussions in public.

Ghaly on Monday thanked Dr. Angell for her service and work on responding to COVID-19 in California. Ghaly said Dr. Erica Pan will become the state's acting Public Health Officer.

Ghaly said the state initiated a new laboratory reporting system and added system capacity to better handle record volume. Ghaly said on Monday the state was able to process 295,000 backlogged records over the weekend. Cases are now ready and available to local jurisdictions to be processed, according to Ghaly.

Newsom also addressed the glitch reported in the state's electronic lab reporting system that left a backlog in COVID-19 test results that may have affected state and local data and contact-tracing efforts. Newsom said he learned of the glitch Monday night.

"We are now accountable," Newsom said.

Dr. Mark Ghaly on Friday said it's all been fixed.

"Over the last 24 hours, we have seen a normalization of the flow of data coming into our lab reporting system. We expect that over the next 24 to 48 hours that the backlog that is between 250,000 and 300,000 records will be resolved giving us a better sense of the total number of tests that were delayed," Ghaly said on Friday. Dr. Ghaly says two mistakes led to the problem. A computer server failed back on July 25. Changes were made to go around the server but they were supposed to be temporary and no one remembered to change things back to normal.

Asked directly if Sonia Angell resigned because of #COVID19 data glitch, @GavinNewsom declines to answer, says he won't address personnel issues in public and declares "At the end of the day, the bucks stops with me. I am accountable." #coronavirus

The $600 weekly enhanced unemployment benefits expired on July 31, and President Trump’s weekend order will extend the payments but at a reduced rate of $400 a week.

"If we picked up 25 percent of the cost associated with an increase of $400 we had a $600 very successful contribution that expired on July 25," Newsom said adding the state has been waiting from Congress and the president. "That program no longer exists and there has been no bridge."

Nesom said it's up to the states to pick up 25 percent of the cost or that it would cost the state roughly $700 million per week.

He said the existing CARES Act funding is already allocated for pandemic response.  In a slide show, he showed that the state cannot shoulder this burden without cutting important services or further burdening businesses and individuals.

"The rest of the money does not exist. The state does not have an identified resource of $700 million a week that we haven't already obliged," Newsom said.

He said it's an entirely new program and will leave out those with the greatest need and delay UI checks.

"We are looking at all additional support we can find but we are going to need the federal government to supply the support for that 25 percent or we will be at peril at making false promises to millions of Californians," Newsom said.

Now @GavinNewsom moves on from detailing why Trump's #unemployment relief isn't...to what CA has done to prevent evictions. He's focusing on economic impacts of #COVID19 today. But elephant in room is, of course, the departure of the state health director & the data meltdown.

The number of coronavirus deaths has exceeded 10,000 deaths in California.

Newsom ordered the closure of schools for in-person classes for those Calfornia counties that are on the state monitoring list which stands at more than 30 counties currently.

Newsom said schools can physically reopen when its county has been off the monitoring list for 14 consecutive days. Schools that don't meet this requirement must begin the year with distance learning, according to Newsom.  Newsom said the schools in those counties on the watch list can't reopen in-person school until they are off the state monitoring list for two weeks straight unless the district superintendent requests a waiver from the county health officer, which may be granted. They will shift to distance learning in more than 30 counties. That includes Los Angeles County, Riverside, San Bernardino, Orange County and Ventura County and counties up north like Alameda County, Marin County, Monterey and Napa.

Both LAUSD and San Diego School District have already announced that their school year will start online and school campuses will remain closed. LAUSD starts Aug. 18.