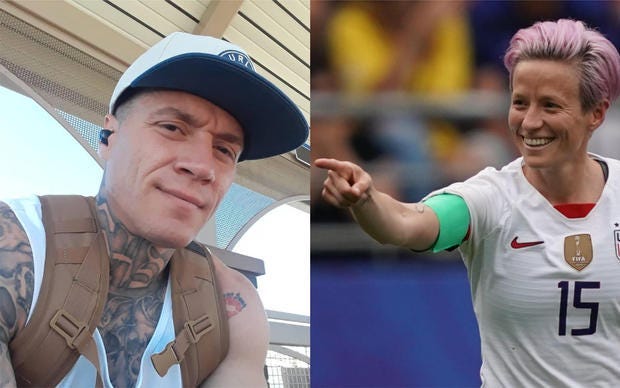 Megan Rapinoe had much to say after her second World Cup victory on Sunday. She called the winning feeling "surreal," she commented on equal pay for herself and her teammates and she gave a shoutout to someone named Brian. "Just one thing – happy birthday, Brain! I love you!" she said at the end of a short interview.

Some viewers wondered, who is Brian? And what made him special enough to get a shoutout from the Golden Ball and the Golden Boot-winner on live TV?

Brian is Rapinoe's older brother, who watched the World Cup matches from a prison rehabilitation facility. When Brian was just 15, he was arrested for bringing methamphetamine to his high school. Megan and her fraternal twin Rachel were only 10 years old at the time.

The older brother they loved and looked up to would be in and out of jail several times after that, according to the U.S. Soccer Federation, which profiled the Rapinoes in 2015.

The Rapinoe family is made up of six siblings and Megan and Brian are especially close. "He's funny and charming and lovable, the kind of guy everybody wanted to be around," Rapinoe told the U.S. Soccer Federation. She and her twin sister would follow their older brother everywhere. He taught them how to fish and even got them into soccer.

Everyone at the Vista Detention Facility, where Brian recently served time, knew his sister was a soccer star. And it's easy to believe that they're siblings — they look a lot alike.

Brian Rapinoe idolizes his little sister and World Cup champion Megan Rapinoe. Brian has been incarcerated for most of his adult life, but was once idolized by his younger sister.INSTAGRAM/ BRIAN RAPINOE & GETTY

Brain is now in a rehabilitative program in San Diego, which allows participants to finish the last 12 months of their sentence taking classes or working, according to ESPN. This is where he watched the World Cup finals.

Growing up, Megan "idolized" Brian, she told USSF. "I wanted to do whatever he did," she said.

The two would get the same haircut, wear the same jersey number – 7 – and play the same position. That's why it was so difficult for a young Megan to deal with her brother's drug addiction. "There's no other heartbreak that I've ever been through like that," she said.

While Brian told USSF that drugs made him selfish, Megan said his drug use taught her and her twin a lesson. "Watching what Brian went through scared the crap out of Rachel and me and brought us together," she said. They instead turned to soccer.

Despite the fact that Brian was in and out of prison for most of his adult life, he and Megan remained close. "She's the only one who can write me letters that make me cry," Brian told USSF. "She tells me what's going on, gives me credit for way more than I deserve, tells me she loves me no matter what. I showed one letter to my homeboy and he was like, 'Damn.'"

Luckily, women's soccer is huge in prison and Brian has never missed an Olympic or World Cup game. "In every place I've served time, we love it," he said. "All my homeboys — black, white, Hispanic, everybody — we cheer loud."

At one point, Brian and Megan couldn't have been more different. He had white supremacy tattoos and she kneeled during the National Anthem. He was incarcerated and she was at the top of her game. But Brian is now rehabbing his life. He has disavowed white supremacy and has removed or covered the tattoos in question.

Brain spent his birthday wearing a Rapinoe jersey and cheering for his younger sister. "Couldn't have been more proud of the USWNT and my lil sister Megan Rapinoe yesterday," Brian wrote on Instagram, sharing several photos from the championship game and his watch party. "She is a legend in her sport as well as off the field... so much love to all our supporters means a lot," he wrote.

Megan's support appears to have helped Brian make leaps and bounds in his own life. He's the big brother, but told ESPN that Megan is his hero. And even as she celebrates one of the greatest wins of her career, Megan was still thinking about her big brother, who was watching her from afar on his birthday.

Couldnt have been more proud of the uswnt and my lil sister megan rapinoe yesterday..it was cap an tassle to her amazing career. She is a legend in her sport as well as off the field..so much love to all our supporters means alot..