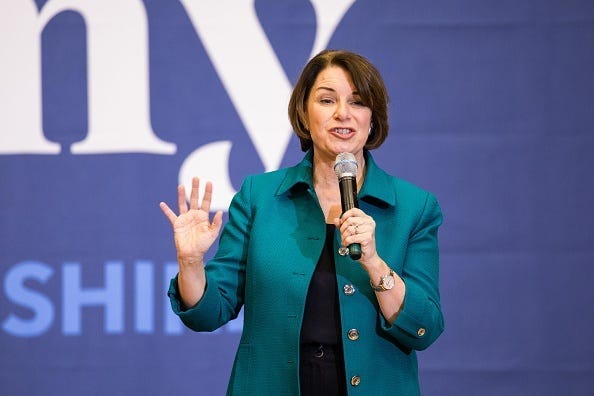 Sen. Amy Klobuchar (D-Minn.) is calling for police reform after there has been scrutiny in her role as a prosecutor in the past.

Sen. Amy Klobuchar (D-Minn.) is calling for police reform after there has been scrutiny in her role as a prosecutor in the past.

Numerous reports have stated that in her seven years as a prosecutor in Minnesota, "Ms. Klobuchar declined to bring charges against multiple police officers who were involved in shootings during her seven-year tenure," according to a New York Times article.

Initially reported in a Yahoo story Thursday, which credited The Guardian, the Yahoo story reported that "Klobuchar did not prosecute Chauvin and other officers involved for the first death, which occurred in October 2006 while she was running for Senate. The case was under investigation when Klobuchar took office in the Senate in Jan. 2007, and later went to a grand jury, which declined to charge the officers."

On Friday, Chauvin was in custody and later charged with third-degree murder and manslaughter in the death of George Floyd.

However, Klobuchar told MSNBC Friday (which was also reported in Newsweek) that "the investigation continued into a time when I was already sworn into the U.S. Senate. I never declined the case. It was handled and was sent to the grand jury by my successor..."

"This idea that I somehow declined a case which has been reported on some news blogs and then sent out on the internet against this officer is absolutely false. It is a lie," Klobuchar said in the Newsweek article Friday.

According to media reports Friday, including the New York Times, "In October 2006, Derrick Chauvin, the same officer who knelt on Mr. Floyd’s neck for more than seven minutes as he complained he could not breathe, was one of six officers involved in the shooting of a man who had stabbed multiple people before turning on the police. Ms. Klobuchar, weeks away from being elected to the Senate, was still the prosecutor, but the case wasn’t heard until after she took the oath of office in Washington."

“Senator Klobuchar’s last day in the office here was December 31, 2006, and she had no involvement in the prosecution of this case at all,” said Lacey Severins, a spokeswoman for the Hennepin County prosecutor’s office, which encompasses Minneapolis, said in the New York Times story.

The Guardian story reported that "Although Klobuchar was the Hennepin county attorney at the time of an October 2006 police shooting involving Chauvin, she did not prosecute and instead the case went to a grand jury that declined to charge the officers with wrongdoing in 2008."

The Guardian also added a clarification to its story at the bottom saying, "This article was amended on 28 May 2020 to clarify Klobuchar did not prosecute and the case went to a grand jury that declined to charge the officers with wrongdoing in 2008."

Friday, Klobuchar commented on a tweet by President Trump saying, "Our community is hurting. Hurting for justice & charges for George Floyd. Vandalism must stop. But we need systemic reform. Like a full scale DOJ pattern/practice investigation of Mpls. Police like I've called for."

Re Trump’s “shooting” tweet?Our community is hurting. Hurting for justice & charges for George Floyd.Vandalism must stop. But we need systemic reform. Like a full scale DOJ pattern/practice investigation of Mpls. Police like I’ve called for. So much better than a tweet.

Graphic video from the scene in Minneapolis showed George Floyd begging for help and was heard telling officers multiple times, "Please, please, please. I can't breathe." Since then, there has been rioting and looting in the Twin Cities but also protests and rallies in cities across the nation, including California against police brutality and Floyd's death.

Chauvin is one of the Minneapolis police officers who was fired this week. Previous police conduct complaints against Chauvin have surfaced in the last day.

The Minnesota Governor has called in the National Guard to help with the looting after rioting started over the death.

Klobuchar is currently being vetted as a vice presidential candidate by Democratic nominee Joe Biden.