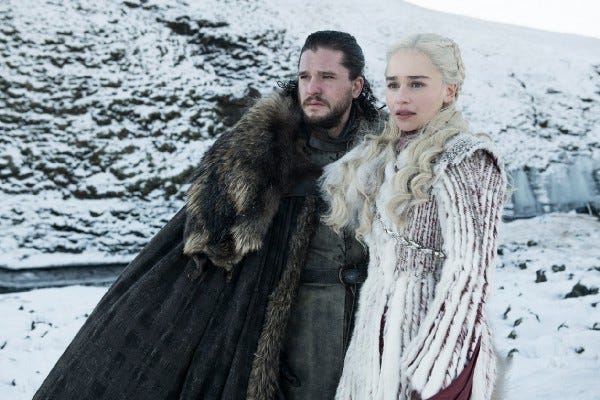 Nobody. Nobody wins, really.

Well, at least not the character you may have had in your 'Game of Thrones' pool.

For the last six weeks, 'Game of Thrones' fans have been on pins and needles to see how their beloved - and oft-criticized -- series ends.

And what a series finale it was.

Bran. That's all you need to know. It was Bran all along -- he's the new King of the Six Kingdoms (because his dear sister Sansa makes a claim for how the North was always independent so she finally gets to be the queen she always wanted).

Where are the rest of your favorite characters, you say?

Tyrion gets thrown in jail because he went against his Queen's wishes and freed Jaime, while Jon broods and sulks in the corner saying lines like "You're wrong. She's my Queen." Until.

Jon kills Dany because finally, finally, someone listens to Varys, I mean Tyrion, after the Mother of Dragons gives a very tyrannical speech to her Unsullied and Dothraki after the battle of Kings Landing about freeing the whole wide world aka mass murder everybody.

Jon ends up stabbing her and we stay on this moment for all of three minutes.

Drogon immediately flies over because he senses his mother's death and doesn't burn Jon to a crisp because ta da he's still a Targaryen.  Then the last remaining dragon in Westeros burns the Iron Throne to the ground because he's probably like "this is what got my mama murdered."

We spent more time on Tyrion looking for Jaime and Cersei in the crypt, sheesh.

Jon gets thrown in a cell too and we time travel again a few weeks into the future where all the remaining nobles from the Houses are gathered to figure out who gets to sit on not the Iron Throne.

Tyrion is given a redemptive speech to make up for all the times he remained mute in seasons 7 and 8 and it's....okay. We almost saw to a proper democracy but that died amid a hail of laughter.

Sansa makes a claim for the North to remain independent, as mentioned earlier, so there's that.

We see Brienne, Ser Davos, Pod, oh Pod! and even Bronn shows up to be part of Tyrion's inner council when he's named Hand of the King for the....fourth time? Fifth time? We've lost track and honestly, it's all right.

And Bran. It's Bran, that's all you need to know and then say "wait, what?"

That being said, our three remaining main characters do end up where they always wanted: the seas for an adventure a la Arya, a queen and back at the Night's Watch with a mood and those glorious furs.

What did you think?

And did you spot the water bottle near Samwell's feet during the council scene?

Twitter users were quick to point it out a few hours after the series finale premiered.

Oopsies. Did you catch this? Earlier this season, a coffee cup made an appearance in #GoT. A water bottle stole the show in the series finale.#KHOU11 #HTownRush #GameOfThrones pic.twitter.com/usQUyafJh7

a water bottle in King’s Landing!! #got #gameofthrones pic.twitter.com/mwGQlsLwnh

Ahead of the series finale, even counseling is being offered by Bark.com, for life after 'Thrones,' according to various media reports.

"Fans can speak to qualified counsellors (who are familiar with the series) to discuss plot twists and storylines," the website says.

As most of America (we're looking at you, people, who are still binging Season 2) waited for the finale, the show's stars also bid adieu to a show that made them famous in bittersweet posts Sunday:

Sansa, Thank you for teaching me resilience, bravery and what true strength really is. Thank you teaching me to be kind and patient and to lead with love. I grew up with you. I fell in love with you at 13 and now 10 years on.. at 23 I leave you behind, but I will never leave behind what you’ve taught me. To the show and the incredible people who make it, thank you for giving me the best life and drama lessons I could have ever asked for. Without you I wouldn’t be the person I am today. Thank you for giving me this chance all those years ago. And finally to the fans. Thank you for falling in love with these characters and supporting this show right through till the end. I’ll miss this more than anything.

To the mensches who changed my life, I salute. To being around the very most gorgeous people, to dental work and to no one messing with Sansa except me when I refuse to let her nap. It changed your lives and mine. #GameofThrones, the greatest show on television... so far ------

Finding the words to write this post has left me overwhelmed with how much I want to say but how small words feel in comparison to what this show and Dany have meant to me. The mother of dragons chapter has taken up the whole of my adult life. This woman has taken up the whole of my heart. I’ve sweated in the blaze of dragon fire, shed many tears at those who left our family early, and wrung my brain dry trying to do Khaleesi and the masterful words, actions (and names) I was given, justice. Game of Thrones has shaped me as a woman, as an actor and as a human being. I just wish my darling dad was here now to see how far we’ve flown. But to you, dear kind magical fans, I owe you so much thanks, for your steady gaze at what we’ve made and what I’ve done with a character that was already in the hearts of many before I slipped on the platinum wig of dreams. Without you there is no us. And now our watch has ended. @gameofthrones @hbo #love #motherofdragonsoverandout

So tonight we have our very last episode. It’s the final step of a long and wonderful journey. A journey that, for me, started at 10am on Monday 19th of July 2010. I know this because recently I found my rehearsal… https://t.co/TUJ46AlaS6

Winter came -- and it was underwhelming.