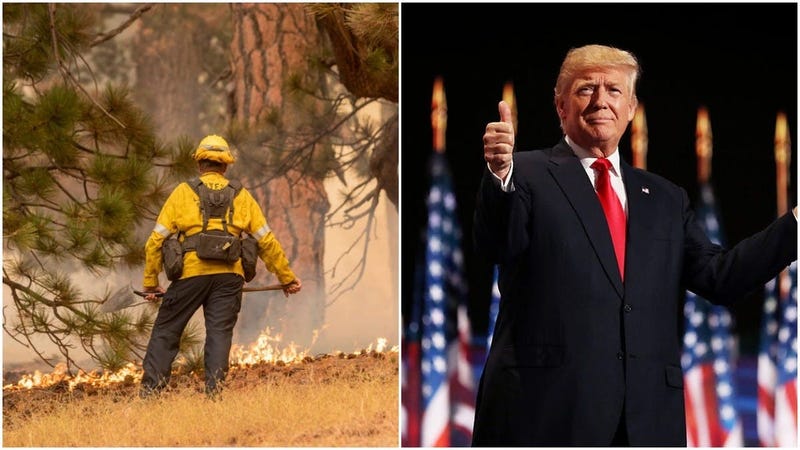 As wildfires continue to burn up and down the state, President Donald Trump will visit California Monday to see the damage for himself.

The president stepped off Air Force One and immediately began talking about "forest management."

"When trees fall down, after about 18 months they become dry like a matchstick and they explode," the president said.  "And also years of dried leaves. It's fuel for the fire. They also have to do cuts, but they don't do that. But if you go to other countries they don't have these problems. Because they manage the forest," Trump added.

Trump told the press on the ground that he was on his way to meeting with Governor Gavin Newsom for a briefing, along with state fire and emergency officials. The meeting will be private.

LA Mayor Eric Garcetti was asked about the President's plans on CNN.  He says he's glad Mr. Trump is coming to see things first-hand, but it's not enough.

According to USA Today, Trump will visit McClellan Park in Sacramento County, where he will be briefed by local and federal fire and emergency officials, the White House said Saturday. McClellan Park has served as the base for firefighter operations in the state

Friday, Trump publicly addressed the fires for the first time Twitter, thanking the 28,000 firefighters and first responders battling the fires in California, Oregon and Washington. He added that approved 37 Stafford Act Declarations, authorizing the FEMA to coordinate all disaster relief efforts.

THANK YOU to the 28,000+ Firefighters and other First Responders who are battling wildfires across California, Oregon, and Washington. I have approved 37 Stafford Act Declarations, including Fire Management Grants to support their brave work. We are with them all the way! pic.twitter.com/Uu9vArw70Z

Back in August, Trump approved a major disaster declaration for the state during an earlier firestorm. But he insists the fires are due to years of poor forest management in the state.

The California stop lands on the last day of the president's three-day swing through the West, which began on Saturday and includes campaign events in Nevada and Arizona.

sports
Patrick Mahomes thinks 2020s Chiefs can be like Brady-era Patriots
music
It's a Girl! For Usher and girlfriend Jenn Goicoechea
sports
Complete 2020 MLB playoffs schedule: matchups, TV info and start times
sports
Lucas Giolito scouts his opponents by playing ‘MLB The Show’ before starts
music
What is 'Wonder'? Shawn Mendes lets us into the new era, teasing latest single
sports
Why Josh Allen believes he will face a fine from NFL