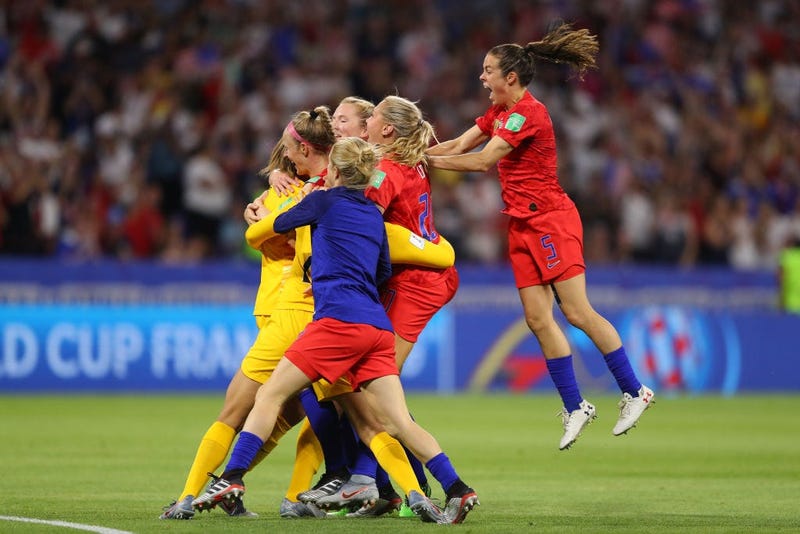 LYON, France  — Alex Morgan celebrated her go-ahead goal with a cheeky tea-sipping motion and Alyssa Naeher stopped a late penalty kick to send the United States into the final at the Women's World Cup with a 2-1 victory over England on Tuesday night.

The top-ranked United States will face the winner of Wednesday's semifinal between the Netherlands and Sweden in the Americans' third straight appearance in the World Cup title match.

Christen Press — who started with Megan Rapinoe out with a hamstring injury — put the United States up early in the match but Ellen White's goal tied it before 20 minutes had passed. Morgan's sixth goal of the tournament came before the break, and on her 30th birthday. She hadn't had a goal since she scored five in the team's 13-0 rout of Thailand to open the tournament.

"I think we've put so much into this journey together — and now we have one more game to close it out," Morgan said.

White's goal was also her sixth but Morgan has the edge for the tournament's Golden Boot with three assists. White appeared to score her seventh in the 69th minute but video review determined she was offside — and the Americans in the crowd of 53,512 at Stade de Lyon roared.

A video review went against the United States late in the game when it determined Becky Sauerbrunn had fouled White in the penalty area. England captain Steph Houghton's penalty shot was smothered by a diving Naeher in the 84th minute.

It was the first penalty kick saved by a U.S. goalkeeper in regular time at the World Cup. At the final whistle, the team mobbed Naeher in front of the goal in celebration.

The mild-mannered goalkeeper was asked afterward if it was the biggest save of her life. "Probably up there, yeah," she said smiling.

The top-ranked Americans have been to the semifinals of all eight World Cups, and they've won the trophy three times, more than any nation. The U.S. team's lone loss in a World Cup title match came to Japan in 2011.

Third-ranked England went through to the semifinals in 2015 but fell to Japan before beating Germany in the third-place match for the Lionesses' best finish in the tournament.

"No words that I can say tonight will make them feel any better," England coach Phil Neville said.

The United States has won 11 straight World Cup matches and is undefeated in its last 16. With the quarterfinal victory in France, the Americans tied Norway's record winning streak set over the 1995 and 1999 tournaments.

The Americans have exuded confidence since arriving in France. After pouncing on Thailand 13-0 in the opener and celebrating each goal in the rout, they beat nemesis Sweden, the team that ousted the United States in the quarterfinals at the 2016 Olympics. And Rapinoe stuck a victorious pose in a 2-1 quarterfinal victory over France on Friday night in Paris.

England started Carly Telford in goal instead of Karen Bardsley, who was out with a hamstring injury. Bardsley had shutouts in both of the team's knockout round matches. Telford started in the team's group stage match against Argentina.

England had shut out its last four opponents but the United States attacked early as expected — the Americans have scored within the first 15 minutes of all of their games in France.

Press delivered first, scoring on a header off a long cross from Kelley O'Hara that sailed over Telford's outstretched arm. It was Press' first goal in France, and her second World Cup goal overall.

Shortly thereafter, Beth Mead served the ball to White, who got between the U.S. center backs for the finish to pull England even. White raised her hands to her face for her customary "glasses" celebration.

The United States pulled ahead when Lindsey Horan found Morgan in front of the net for the header. It was Morgan's 107th international goal, moving her into a tie for fifth on the U.S. career list with Michelle Akers.

"I can't even express how proud I am. It was just such a great effort from everybody," U.S. coach Jill Ellis said.

The United States leads the tournament field with 24 total goals.

Last week, Megan Rapinoe went from controversy to triumph, scoring twice for the United States in the much-anticipated clash with host France to send the defending champions into the semifinals of the Women's World Cup with a 2-1 victory Friday night.

Multiple reports say that Rapinoe, who did not play the first have of the game, is out with an injury.

France was vying to become the first nation to simultaneously hold the men's and women's World Cup trophies, but the home-field advantage and the flag-waving crowd that belted out La Marseillaise didn't faze the ever-confident U.S. team.

Wednesday President Trump got into a Twitter spat with Rapinoe, saying she "should never disrespect our Country, the White House, or our Flag, especially since so much has been done for her & the team. Be proud of the Flag that you wear. The USA is doing GREAT!"

He also said the team is invited to the White House whether they win or lose.

This comes after Rapinoe said recently there was "no f---in' way will we be invited to the White House."

Watch the video from CNN where she says the team won't be invited: https://www.cnn.com/videos/us/2019/06/26/megan-rapinoe-white-house-visit-sot-es-scholes-vpx.cnn

The team has won its games against Sweden, Spain, Chile and Thailand and France.

Women’s soccer player, @mPinoe, just stated that she is “not going to the F...ing White House if we win.” Other than the NBA, which now refuses to call owners, owners (please explain that I just got Criminal Justice Reform passed, Black unemployment is at the lowest level...

....in our Country’s history, and the poverty index is also best number EVER), leagues and teams love coming to the White House. I am a big fan of the American Team, and Women’s Soccer, but Megan should WIN first before she TALKS! Finish the job! We haven’t yet....

....invited Megan or the team, but I am now inviting the TEAM, win or lose. Megan should never disrespect our Country, the White House, or our Flag, especially since so much has been done for her & the team. Be proud of the Flag that you wear. The USA is doing GREAT!

sports
Kevin Durant denies speaking with James Harden about Nets: 'They're making these stories up'
music
Keke Palmer posts inspiring PCOS makeup-free acne photo: 'I know this is not me’
sports
Kirk Herbstreit worried for college football: 'What the hell is happening to our sport?'
music
Kelly Clarkson reveals thinking behind 'horrible' divorce: 'This isn't happiness'
music
Barack Obama admits why he didn't award Dolly Parton with Medal of Freedom: 'I'm shocked'
sports
Tyreek Hill's first impression of Patrick Mahomes? 'I thought he was trash'