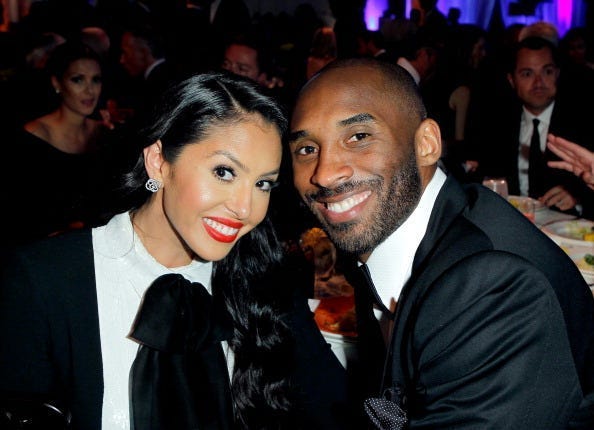 Kobe and Gianna died along with seven others on January 26, when the helicopter they were in crashed in Calabasas.

Both tattoos appear to be words but are not completely visible.

Bryant described them as "sweet messages."

Truly honored to give you something to keep with you my friend. 🙏🏼Repost from @vanessabryant • I wanted my boo boo’s @kobebryant sweet message transferred on me. ❤️@nikkohurtado came through for me. Thank you! #inked #messagetransfer #BooBoo #throwback #tattooinmyhallway

In the second video, posted by tattoo artist Nikko Hurtado, Bryant, 38, shared the tattoo in tribute to Gianna.

Shoutout to @nikkohurtado for coming over and helping me get my Gigi’s sweet message transferred on me #throwbacktoFebruary #housecall,” Bryant posted, showing off the ink on her wrist. “So happy I can see my Gigi’s handwriting everyday ❤️#mambacita.”
View this post on Instagram

Truly honored my friend. #ripkobeandgianna Repost from @vanessabryant • Shoutout to @nikkohurtado for coming over and helping me get my Gigi’s sweet message transferred on me. ❤️#throwbacktoFebruary

Thursday, the Television Academy named Bryant the recipient of the 72nd Los Angeles Area Emmy Governors Award in honor of his legacy of philanthropy, community building, and inspiration that extended beyond the basketball court.

As reported by the Los Angeles Times, during the public memorial for her late husband and daughter, Bryant spoke of a "sweet text" the Lakers superstar sent her before he perished in the crash.

Bryant said, Kobe “mentioned how he wanted to spend time together. Just the two of us without our kids, because I’m his best friend first.

“We never got the chance to do it. We were busy taking care of our girls and just doing our regular, everyday responsibilities. But I’m thankful I have that recent text. It means so much to me.”

In February, Vanessa filed a wrongful death suit against the helicopter company that crashed and killed her husband and eight others.

Attornies for the estate of Ara Zobayan, the pilot who was flying the helicopter say the civil case against their client should not be held in Los Angeles, as they would not be able to receive an "impartial" jury.