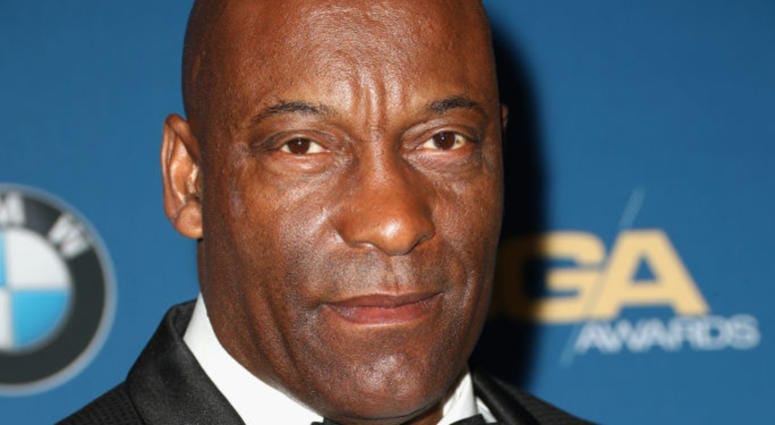 RIP John Singleton. So sad to hear. John was a brave artist and a true inspiration. His vision changed everything.

Rest up John Singleton. We never met, but Remember The Time literally changed my life. Thank you so much. God Bless you

The Oscar-nominated director was taken off life support today, according to Deadline.

According to TMZ, he was in a medically-induced coma and is non-responsive.

Singleton suffered a massive stroke nearly on April 17, after checking himself into Cedars-Sinai Medical Center because he felt pain in one of his legs.

Singleton was in his early 20s, just out of the University of Southern California's School of Cinematic Arts, when he wrote, directed and produced "Boyz N the Hood." Based on Singleton's upbringing and shot in his old neighborhood, the low-budget production starred Cuba Gooding Jr. and Ice Cube and centered on three friends in South Central Los Angeles, where college aspirations competed with the pressures of gang life. "Boyz N the Hood" was a critical and commercial hit, given a 20-minute standing ovation at the Cannes Film Festival and praised as a groundbreaking extension of rap to the big screen, a realistic and compassionate take on race, class, peer pressure and family. Singleton would later call it a "rap album on film."

For many, the 1991 release captured the explosive mood in Los Angeles in the months following the videotaped police beating of Rodney King. "Boyz N the Hood" also came out at a time when, thanks to the efforts to Spike Lee and others, black films were starting to get made by Hollywood after a long absence. Singleton became the first black director to receive an Academy Award nomination, an honor he would say was compensation for the academy's snubbing Lee and "Do the Right Thing" two years earlier, and was nominated for best screenplay. ("The Silence of the Lambs" won in both categories). At 24, he was also the youngest director nominee in Oscar history.

"I think I was living this film before I ever thought about making it," Singleton told Vice in 2016. "As I started to think about what I wanted to do with my life, and cinema became an option, it was just natural that this was probably gonna be my first film. In fact, when I applied to USC Film School they had a thing that asked you to write three ideas for films. And one of them was called Summer of '84, which was about growing up in South Central LA."

In 2002, "Boyz N the Hood' was added to the National Film Registry by the Library of Congress, which called it "an innovative look at life and the tough choices present for kids growing up in South Central Los Angeles."

None of Singleton's subsequent movies received the acclaim of "Boyz N the Hood" and he was criticized at times for turning characters into mouthpieces for political and social messages. But he attracted talent ranging from Tupac Shakur to Don Cheadle and explored themes of creative expression ("Poetic Justice"), identity ("Higher Learning") and the country's racist past, notably in "Rosewood," based on a murderous white rampage against a black community in Florida in 1923. He also made the coming-of-age story "Baby Boy," a remake of the action film "Shaft" and an installment in the "Fast and Furious" franchise, "2 Fast 2 Furious." More recent projects included the FX crime drama "Snowfall," which he helped create. Starring Damson Idris, "Snowfall" returned Singleton to the Los Angeles of his youth and the destructive effects of the rise of crack cocaine.

"Drugs devastated a generation. It gave me something to write about, but I had to survive it first," Singleton told the Guardian in 2017. "It made me a very angry young man. I didn't understand why I was so angry, but I wasn't someone who took my anger and applied it inward. I turned it into being a storyteller. I was on a kamikaze mission to really tell stories from my perspective — an authentic black perspective."

Singleton was married twice, and had five children. Besides his career in movies, Singleton also directed the video for Michael Jackson's "Remember the Time," which included Eddie Murphy and Magic Johnson. He cast hip-hop artists and other musicians in many of his films, including Ice Cube in "Boyz N the Hood," Janet Jackson and Shakur in "Poetic Justice" and Tyrese Gibson in "Baby Boy."

Singleton's early success didn't shield him from creative conflicts or frustration with Hollywood studios. He blamed the commercial failure of "Rosewood" on lack of support from Warner Bros. He fought with producer Scott Rudin during the making of "Shaft" and was furious when Rudin brought in Richard Price to revise the script. He had planned to direct a biopic about Shakur, but quit after clashing with Morgan Creek Productions. In 2014, he chastised the industry for "refusing to let African-Americans direct black-themed films," but Singleton was pleased in recent years by the emergence of Ava DuVernay, Barry Jenkins, Jordan Peele and others.

"There are these stacks of (films by non-black filmmakers) where black people have had to say, 'OK, at least they tried,'" he told The Hollywood Reporter in 2018, adding that now blacks were making the films themselves. "What's interesting when you see 'Black Panther' is you realize it couldn't have been directed by anybody else but Ryan Coogler. It's a great adventure movie and it works on all those different levels as entertainment, but it has this kind of cultural through-line that is so specific that it makes it universal."

A Singleton spokesperson released the below statement:

It is with heavy hearts we announce that our beloved son, father and friend, John Daniel Singleton will be taken off of life support today. This was an agonizing decision, one that our family made, over a number of days, with the careful counsel of John’s doctors.
John Singleton is a prolific, ground-breaking director who changed the game and opened doors in Hollywood, a world that was just a few miles away, yet worlds away, from the neighborhood in which he grew up.
John grew up in South Central L.A with a love of cinema that showed itself early on. He went on to become one of the most lauded graduates of the USC School of Cinematic Arts. Within months of graduating, John returned to South Central to shoot his debut feature, Boyz N the Hood. The movie, which was unusually shot in sequence, masterfully captured a story of friendship, youth and the peril of hard choices in a community marred by gang violence. The film earned special honors at its debut at Cannes and Singleton went onto become the youngest director and first African-American writer-director nominated for the Academy Award. Two decades later, the film was placed in the Library of Congress, a marker of its cultural and historical significance.
John loved nothing more than giving opportunities to new talent and his films came to be known for career-making roles with actors who the industry would come to embrace; talents such as Tupac Shakur, Regina King, Cuba Gooding Jr., Terrence Howard, Ice Cube, Tyrese and Taraji P. Henson.
Singleton’s work spanned genres and showcased his curiosity and creativity: the remake of Shaft, was a homage to his mentor, Gordon Parks. He also made historical films such as Rosewood and action films such as 2 Fast 2 Furious. Films like Baby Boy and Four Brothers were prescient in the questions they posed about men and the crisis in American masculinity. As streaming platforms created new opportunities in television, Singleton took his talents to shows such as Billions, The People v. O.J. Simpson: American Crime Story and Empire. Most recently, he co-created and executive produced the current FX hit drama series Snowfall, in which he engaged such writing talents as Walter Mosley.
John was such a supernova in his youth that we forget that he was only beginning to fully assert his gifts as a director. Kurosawa was 52 when he directed High Low. Hitchcock was 56 when he directed To Catch a Thief. As much as we will treasure his body of work, we were looking forward to the films John would have made in the years ahead.
In his private life, John is a loving and supporting father, son, brother, and friend who believed in higher education, black culture, old school music and the power of film.
John’s confidence in his place in Hollywood was only matched for his passion for the sea. John kayaked in Marina Del Rey every morning. His greatest joy, when not on set, was sailing his boat, J’s Dream, up and down the Pacific Coast. The American writer Willa Cather once said, “There are some things you learn best in calm, and some in the storm.” We who have grown up with John, made movies with him, sailed with John and laughed with John, know the universe of calm and creativity he created for so many. Now in the wake of his death, we must navigate the storm without him. It is, for us, heartbreaking.
Like many African Americans, Singleton quietly struggled with hypertension. More than 40% of African American men and women have high blood pressure, which also develops earlier in life and is usually more severe. His family wants to share the message with all to please recognize the symptoms by going to Heart.org.
We are grateful to his fans, friends and colleagues for the outpour of love and prayers during this incredibly difficult time. We want to thank all the doctors at Cedars Sinai for the impeccable care he received.
John Daniel Singleton will be survived by his extraordinary mother, Sheila Ward, his father, Danny Singleton and his children Justice, Maasai, Hadar, Cleopatra, Selenesol, Isis, and Seven.

--Associated Press contributed to this story.