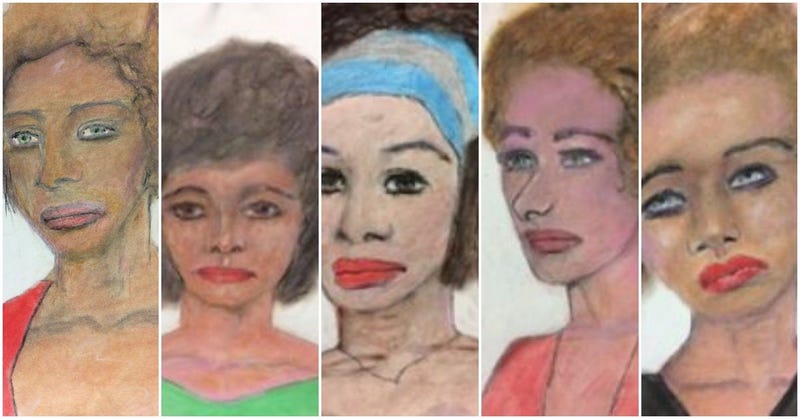 DALLAS (AP) — The FBI has released 16 sketches and other information on a string of unsolved cold-case homicides that investigators say a serial killer admitted to carrying out.

The bureau updated on Wednesday information it had posted in November on its website. The update includes drawings made recently by admitted serial killer Samuel Little, based on his memories of some of his victims.

One of the drawings, of a young woman Samuel Little claims to have killed in Los Angeles in 1996, is especially haunting.
FBI

An FBI statement says Little targeted "marginalized and vulnerable women who were often involved in prostitution and addicted to drugs." The bureau hopes the information will generate tips and clues from the public that could help solve the dozens of unsolved homicides.

Little, was a former competitive boxer, and according to court records, he would punch his victims before strangling them - leaving less always "obvious signs" the women had been murdered.

"With no stab marks or bullet wounds, many of these deaths were not classified as homicides but attributed to drug overdoses, accidents, or natural causes," the FBI wrote in its initial report in November 2018.

The FBI says Little, who's 78, is in poor health and is expected to remain in a Texas prison.

The Texas Rangers say Little to date has confessed to 90 homicides nationwide, including 15 in Los Angeles over the past four decades. Ector County District Attorney Bobby Bland in Odessa, Texas, said 50 cold homicide cases have been closed as a result and most of the unsolved homicides remaining are in California.

Although Little initially pleaded not guilty at his trial, he was eventually convicted and sentenced to three consecutive life sentences for killing three women in Los Angeles.

LAPD Det. Mitzi Roberts says Little "vividly" remembers his victims and what he did to them, adding that the focus now is to provide answers for the victims' families.