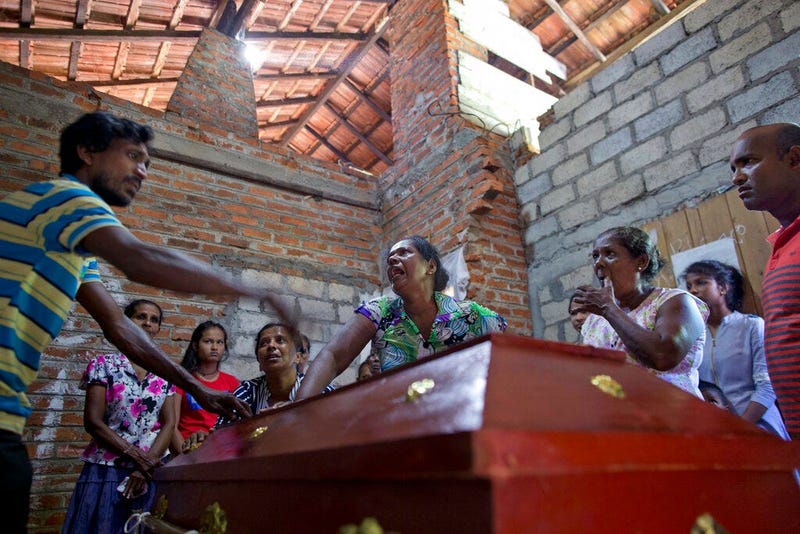 At least nine bombs that tore through churches and hotels in three Sri Lankan cities on Easter Sunday. The death toll had risen to at least 290, with more than 500 others wounded, by Monday morning. Defense Minister Ruwan Wijewardene described the coordinated blasts as a terrorist attack by religious extremists.

Here is what we know

At 8:45 a.m. on Sunday, bombs tore apart three churches and at least three hotels in Colombo. There was another explosion at a housing complex in Dematagoda.

The U.S. Embassy in Colombo has confirmed at least 4 U.S. citizens were killed in the bombings.

Sri Lankan police said 24 suspects were in custody and that the attacks appear to have been carried out by suicide bombers.

There has been no claim of responsibility, but officials say a local group, working with support from an "international network," is suspected.

Officials have suggested that there was some advance knowledge of a terror plot in Sri Lanka, and that intelligence may have been "ignored."

One of the four U.S. citizens killed in the Sri Lanka bombings was identified on Monday by his employer as Dieter Kowalski, an engineer for a global education product and services company. The CEO of Pearson, the U.K.-owned firm, said Kowalski had just arrived at his hotel in Colombo on a work trip.

"I'm sorry to have to share the awful news that our colleague, Dieter Kowalski, was killed yesterday in the Easter Sunday atrocities in Colombo, Sri Lanka," Pearson CEO John Fallon said in a public statement posted to his LinkedIn account. "Dieter had just arrived at his hotel, where many of our colleagues have stayed over the years, when he was killed in an explosion,"

Pearson is described as a company offering "educational products and services, assessment, and professional development for all stages" of education.

"Colleagues who knew Dieter well talk about how much fun he was to be around, how big-hearted and full-spirited he was," Fallon said. "They tell of a man to whom we could give our ugliest and most challenging of engineering problems, knowing full well that he would jump straight in and help us figure it out."

An official at the U.S. Embassy in Colombo, Sri Lanka confirmed to CBS News on Monday that at least four U.S. citizens were killed in the Easter Sunday bombing attacks.

The representative said she could not give any further details "due to privacy concerns and out of respect to the families."

Secretary of State Mike Pompeo said on Sunday that "several" Americans were confirmed to have been among the dead. The victims identities have not yet been made public.

CBS News correspondent Elizabeth Palmer reported that Sri Lanka's president, Maithripala Sirisena, declared a nationwide state of emergency to begin at midnight and continue indefinitely in the wake of the devastating terror attack.

The declaration will give law enforcement authorities extensive powers, including the ability to detain and interrogate people without court orders.

A night curfew would also take effect from Monday evening.

President Sirisena also declared Tuesday a National Day of Mourning for the victims of the attack.

The richest man in Denmark has lost three children in the Sri Lanka terror attacks, his spokesperson confirmed on Monday. Anders Holch Povlsen, 46, is a fashion mogul -- one of the names behind global retail giants ASOS and Bestseller.

"We have no further comment and we ask that the family's privacy is respected at this time," Stubkier said. He would not say which of Povlsen's children were killed or whether they had other family members visiting Sri Lanka with them at the time.

It was unclear which of the bombings -- which struck three churches and at least three hotels in the country, killed Povlsen's children.

According to Forbes, Povlsen has a net worth of $7.9 billion.

CBS News staff in the Sri Lankan capital reported a large explosion on Monday afternoon as police investigated the series of devastating suicide bomb attacks from the previous day.

Witnesses told the Reuters news agency that an explosives-laden vehicle had blown up as law enforcement officers attempted to defuse devices inside it.

Police went to inspect the van Monday after people reported it had been parked near St. Anthony's Shrine, one of the churches in which dozens were killed by bombers, since Sunday. They discovered three bombs that they tried to defuse, but the bombs detonated, sending pedestrians fleeing in panic.

Smoke rose from the scene after the blast and debris could be seen scattered on the street. Nobody was reported injured in the blast.

There were reports of other devices found around the city, including dozens of detonators apparently found in Colombo's main bus station.

A Sri Lankan government official said the seven suicide bombers that attacked churches and hotels on Easter Sunday were from the domestic militant group known as National Thowfeek Jamaath, but that they likely had support from outside the country.

All of the bombers were Sri Lankan citizens, Health Minister Rajitha Senaratne said at a news conference.

"We do not believe these attacks were carried out by a group of people who were confined to this country," Senaratne said. "There was an international network without which these attacks could not have succeeded." He did not provide further detail on any suspected international links.

Sri Lankan police said Monday that they were examining reports that intelligence agencies had prior warnings of possible attacks before the deadly bombings in churches and hotels.

Police chief Pujuth Jayasundara issued an intelligence alert to top officers on April 11, according to French news agency AFP, warning that suicide bombers from a radical Muslim group linked to the vandalization of Buddhist statues was planning to attack "prominent churches."

While no group has claimed responsibility for the Easter attack, AFP quoted law enforcement sources as saying all 24 people arrested since the blasts were suspected members of an "extremist" group. The sources did not specify which group, and it remained unclear whether those in custody were suspected members of the National Thowfeek Jamaath (NTJ) group, which was the focus of the warning issued on April 11 by Jayasundara.

Two government ministers have alluded separately to intelligence failures. Telecommunications Minister Harin Fernando tweeted, "Some intelligence officers were aware of this incidence. Therefore there was a delay in action. Serious action needs to be taken as to why this warning was ignored."

Mano Ganeshan, the minister for national integration, said his ministry's security officers had been warned by their division about the possibility that two suicide bombers would target politicians. The police's Criminal Investigation Department, which is handling the investigation into the blasts, will look into those reports, Gunasekara said.

Security personnel inspects inside St. Sebastian's Church in Negombo, Sri Lanka, April 22, 2019, a day after the church was hit in series of bomb blasts targeting churches and luxury hotels in the country.GETTY

At least 290 people were killed and hundreds more injured in the blasts, pitching the South Asian island nation into the worst chaos it has seen since a bloody civil war ended a decade ago. Prime Minister Ranil Wickremesinghe said he feared the violence could trigger instability in the country and its economy.

The Eiffel Tower's Twitter page announced it would turn off its lights "to pay tribute to the victims of the Sri Lanka attacks."

A witness to one of the bombings, at a hotel by the zoo in Colombo, told CBSN about the chaotic aftermath that unfolded after the explosion. Asela Waidyalankara described hearing a large blast and rushing to see what had happened.

"Suddenly, near my residence, we heard a strong sound of an explosion, so I rushed up to my rooftop to observe what was going on, and I observed a small building from a location about 1 kilometer or less away from us," Waidyalankara said by phone. "The closest landmark is the National Zoo of Sri Lanka, and we noticed within a few minutes there was a helicopter that approached the location and within a few more minutes we could hear ambulances and firetrucks coming into the area."

"At that moment we realized this was probably a larger attack in connection to the chain of attacks that we witnessed," he continued. "Incidentally so, the newswires picked it up, and said that two people had died in that particular explosion."

"We as Sri Lankans are shocked and heartbroken," Waidyalankara said. "But yet we will persevere."

Pompeo says Americans are among those killed

U.S. Secretary of State Mike Pompeo condemned the attack in a statement Sunday morning and confirmed that "several U.S. citizens were among those killed."

"Attacks on innocent people gathering in a place of worship or enjoying a holiday meal are affronts to the universal values and freedoms that we hold dear, and demonstrate yet again the brutal nature of radical terrorists whose sole aim is to threaten peace and security," Pompeo said. "The U.S. Embassy is working tirelessly to provide all possible assistance to the American citizens affected by the attacks and their families."

24 suspects arrested in connection with the blast

Defense Minister Ruwan Wijewardena described the blasts as a terrorist attack by religious extremists, and police said at least 24 suspects were arrested -- all Sri Lankan nationals.

There has been no claim of responsibility for the attacks. Wijewardena said most of the bombings were believed to have been suicide attacks. Prime Minister Ranil Wickremesinghe said he feared the violence could trigger instability in the country and its economy.

Wickremesinghe said his government would "vest all necessary powers with the defense forces" to take action against those responsible" for Sunday's attacks, "regardless of their stature."

At least 27 foreigners among the dead

The Sri Lanka government confirmed at least 11 foreigners were among the deceased. An additional 19 foreign nationals have been injured. According to the Sri Lanka Foreign Ministry, those killed include: