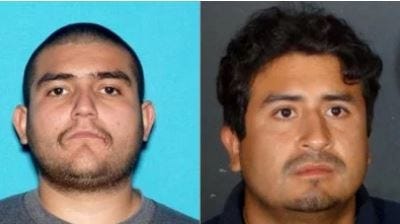 LOS ANGELES - Detectives today were seeking to locate two men for questioning in the deaths of two brothers in a hit-and-run collision in Highland Park.

The persons of interest were identified as Christian Mario Camarena Ramirez, 24, of Van Nuys and Alejandro Nuno Coronado, 25, of Highland Park, according to the Los Angeles Police Department's Central Traffic Division.

The fatal collision, which occurred at about 1:15 a.m. Sunday at the intersection of San Pascual Avenue and Pollard Street, and took the lives of Benigno Felix-Zuniga, 25, and Jesse Zuniga, 19.

The brothers were in a 2017 Ford Fusion that was traveling east on Pollard Street and were making a right onto northbound San Pascual Avenue when their vehicle was struck by a speeding 2018 Chevrolet Silverado pickup truck, according to the LAPD.

Witnesses told police the Silverado reached speeds up to 80 mph before it struck the driver's side of the sedan.

The Fusion was pushed 120 feet before the Silverado veered to the right and struck at least one parked vehicle that was pushed onto a sidewalk and into a wrought iron fence, police said.

"The male Hispanic driver and a male Hispanic passenger exited the Silverado and they fled on foot northbound on San Pascual Avenue to eastbound on Hough Street," according to a police statement.

Firefighters responded, but the Zuniga brothers were pronounced dead at the scene.

They had tried to get through a balky motorized gate into the parking area of an apartment complex, but when it didn't open they drove around the block looking for a parking spot, and that's when the crash occurred, according to CBS2.

Detectives contacted the owners of the truck, who said various members of the family use the vehicle.

The track program at Highland Park's Franklin High School, where Jesse Zuniga was a runner, tweeted:

"It's with a heavy heart that we report that one of our former Panther track athletes passed away in a horrible hit and run car crash last night here in Highland Park. Jesse Felix Zuniga will be missed by his family, friends and the Panther community."

Anyone with information regarding the whereabouts of Ramirez and Coronado was urged to call Central Traffic Division Detective Juan Campos at 213-833-3713 or email him at 31480@lapd.online. After hours, information can be submitted to the watch commander at 213-833-3746 or by calling 877-LAPD-24-7.

Anonymous tips may be submitted through Crime Stoppers by calling 800- 222-TIPS or at lacrimestoppers.org.

The LAPD offers rewards of up to $50,000 for information leading to arrests and convictions in hit-and-run cases.