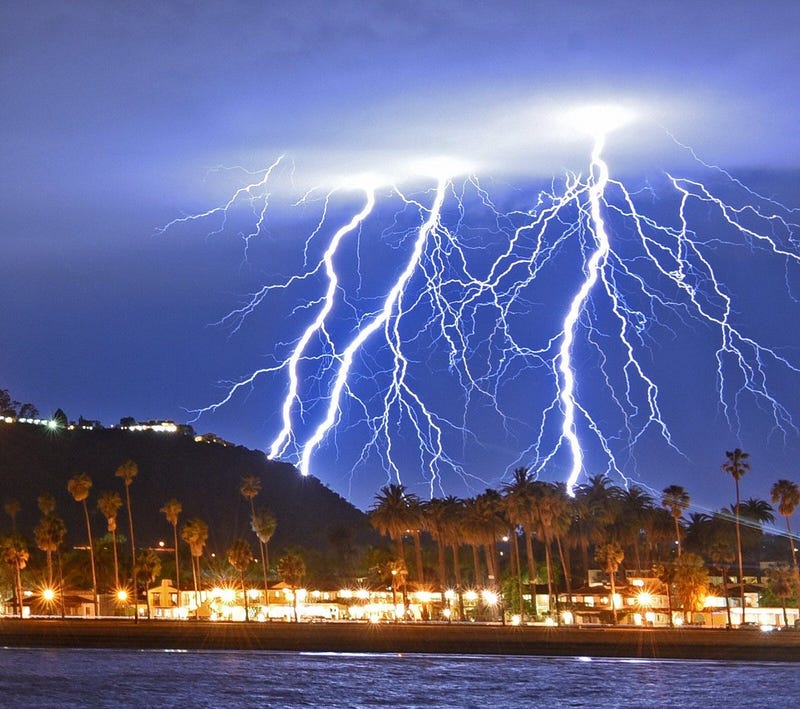 A storm bloated by tropical moisture packed in an atmospheric river out of Hawaii unleashed rain on the Southland for a second day today, raising fears of flash flooding below several areas denuded by wildfires in Santa Barbara, Ventura and Los Angeles counties.

The lightning and thunder will continue today, but nothing like the show in the skies overnight. The national weather service says there were thousands of lightning pulses over southern California including nearly 1500 in one five minute period. Meteorologist Curt Kaplan:

"It's kind of unusual but basically that's when generally we see the lightning and thunder that usually occurs when we see a lot of cold air lost. This was a different type of scenario on how this worked out," he said.

A lightning strike is believed to be responsible for a power outage in the Venice area where these residents watched the light show.

A strike hit a Delta flight out of LAX, which returned to the airport without incident. Power was also briefly knocked out to three terminals.

Whoa! We've had over 1,200 lightning strikes tonight. @Stu_Mundel in #Sky2 was looking at the Playa del Rey area when one touched the ground causing a transformer to blow. #CBSLA pic.twitter.com/Lafi0544GG

#CAwx- Lightning strikes in the skies above Santa Barbara, CA, March 5, 2019, as seen in these views from Stearns Wharf. pic.twitter.com/htNyYzy2Ef

Only light rain was falling early this morning, but the rain will intensify before turning to showers this afternoon, said National Weather Service meteorologist Curt Kaplan from the NWS forecasting station in Oxnard.Lightning bolts illuminated the night sky from time to time this morning, and Kaplan said the lightning would taper off.

The weather service issued a flash flood watch for all burn areas in Santa Barbara, Ventura and Los Angeles counties and said it would be in force until 11 a.m.

A Flood Advisory is in effect until 7:30AM over #LACounty! Roadway flooding has been reported by CHP across the area! Take precautions when driving in your commute! #SoCal #CAwx #LArain #LAweather pic.twitter.com/jTB9wFyT4c

NWS forecasters said peak rainfall rates until the watch expires could range between three-quarters of an inch and an inch per hour. Any isolated thunderstorms could produce hourly rates of an inch-and-a-half of rain per hour, along with heavy 15-minute and 30-minute bursts of rainfall, they said.

"Southern California residents, in or below the recently burned areas, are urged to take the steps necessary to protect their property. Persons in the watch area should remain alert and follow directions of emergency preparedness officials."Forecasters urged motorists to be especially cautious.

"Turn around, don't drown when encountering flooded roads," urged the NWS statement. "Most flood deaths occur in vehicles. Be especially cautious at night when it is harder to recognize the dangers of flooding."Also in effect this morning was a wind advisory scheduled to expire at noon in the San Gabriel Mountains, where south winds blew at between 20 and 30 miles per hour, with gusts of 50 and 60 mph, and the Antelope Valley, where the same conditions prevailed.

In coastal areas of Orange County, a beach hazard statement issued by the NWS forecast office in San Diego will be in force this morning because of the possibility of lightning at the beaches.

"A beach hazards statement for beach lightning means that there is the potential for cloud-to-ground or cloud-to-water lightning strikes, which could result in injury or death," a statement warned. "Move indoors until the storm passes and stay away from metal objects."

Temperatures, meanwhile, were running around 10 degrees below normal.

Showers were forecast in L-A County today ... along with highs of 45 degrees on Mount Wilson; 58 in Saugus, Palmdale and Lancaster; 59 in Avalon; 61 in Pasadena and Burbank; 62 in San Gabriel and at LAX; and 63 in Downtown L-A , Long Beach and Woodland Hills. Showers are also forecast Thursday, Sunday and Monday.

Showers were also forecast today in Orange County, along with highs of 46 on Santiago Peak; 52 on Ortega Highway at 2,600 feet; 56 in Fremont and Trabuco canyons; 58 in Mission Viejo; 59 in Laguna Beach, San Clemente and Yorba Linda; 61 in Newport Beach and Anaheim; and 62 in Fullerton and Irvine. Showers are next forecast in Orange County on Monday.