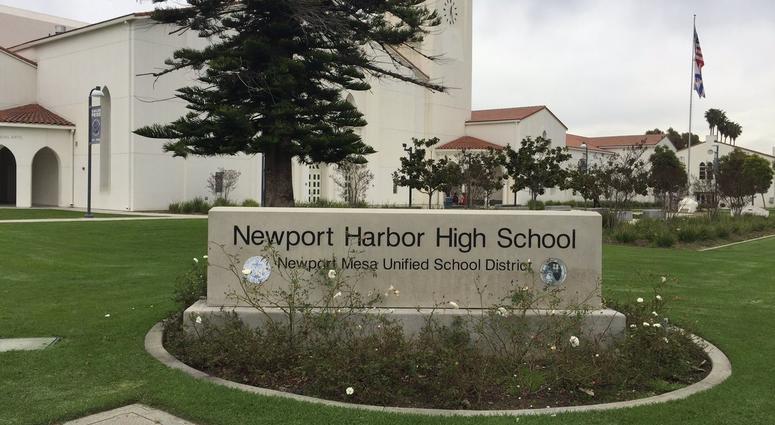 (KNX 1070) -- Investigators in Orange County say they know who is responsible for posting Nazi Posters at Newport Harbor High School and Fullerton College in March.

Prosecutors say a 22-year-old Fullerton woman is behind two recent hate incidents in Orange County. Grace Ziesmer has been charged with one count of vandalism and two counts of graffiti. She's accused of posting Nazi propaganda posters on city light poles near Fullerton College and putting several more around the campus of Newport Harbor High just days after some of its students posted an anti-Semitic picture online.

"This is not our community, this is not who we are, this is not our school. So the fact now that we randomly have these 10 posters pop up, it makes no sense," a parent at the high school said at the time the posters were found.

The posters included swastikas and various Nazi statements. The DA's office says she won't be facing hate crime enhancements because there is not enough evidence to prove she was targetting a specific Jewish student at either school. However, she could still face up to a year and a half behind bars.

In early March, Eva Schloss, whose father, brother and stepsister Anne Frank perished in the Holocaust met with a group of Newport Beach students involved in a Nazi salute incident that has sparked outrage in the community.

Organizers of the meeting at Newport Harbor High School aimed to make it a teachable moment.

"It's imperative that today's young people come face to face with the consequences of unchecked hatred," said Rabbi Reuven Mintz of the Chabad Center for Jewish Life in Newport Beach, who played a role in organizing the meeting.

"Our hope is that meeting someone who witnessed firsthand the atrocities committed under that same swastika and salute will help guide these students toward a life of tolerance and acceptance, spreading a message of inclusion and love, rather than one of hatred," Mintz said.

The meeting with the 89-year-old Schloss, a Holocaust survivor herself who wrote about her experiences in her book "After Auschwitz: A story of Heartbreak and Survival," will be private, organizers say.

It comes less than a week after a photo of the students saluting like Nazis around red plastic cubs arranged in a swastika formation during a game of beer pong touched off a firestorm of criticism after being posted on social media.

"As we await a fuller account of what happened at an off-campus, high school party with students reportedly from the Newport-Mesa Unified School District, where cups were formed into a swastika surrounded by students engaged in a Nazi salute, I want to express my condemnation of any and all anti-Semitic acts, and again emphasize my solidarity with the Jewish community in Orange County and elsewhere," Moorlach said.

"This is a personal matter for me," he added. "My folks, ages 91 and 88, suffered in their teenage years as the Nazi blitzkrieg conquered our native Holland in 1940. In 1944-45, they and all Dutch people suffered as the Nazis, their evil nearing defeat, imposed a famine in Holland just before it was liberated by the Allies. My wife is also of partial Jewish ancestry.

"I also have long worked with local Jewish friends and groups to promote tolerance and fight hate. This also sparked in me an interest in California Jewish history, of which numerous volumes now are in my personal library."

Moorlach said he supports "a response that seeks to educate these students on the real evils of Nazism and the Holocaust is an appropriate resolution to what was likely a poor and ill-informed high school gag."