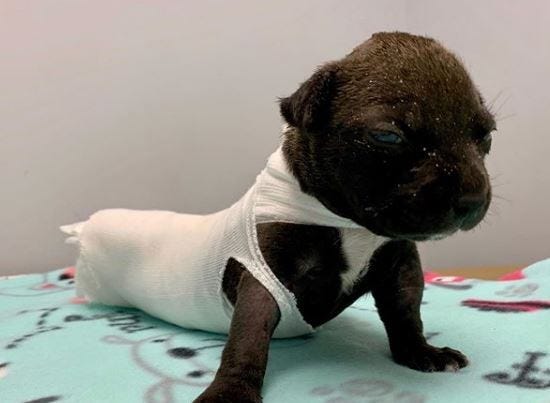 (KNX 1070) -- The puppy was found tossed in a dumpster in Coachella just a week after several other puppies were also dumped.

Only, this time the dog found was severely burned and abused.

She was found in a dumpster in Coachella, discarded in a plastic Walmart bag. Someone rummaging through the trash heard her crying, took her to the owner of a local jewelry store, where she was rushed to emergency. . It appears as if she was burned with a caustic substance, or a metal object like an iron. She is only a few weeks old, had a portion of her tail cut off, and can not walk due to being beat and assaulted. Currently she is in intensive care at emergency on twenty four hour monitoring. . The daughter of the person who found her @ale_espinozazaz named her Hope. We will do everything we can to hold whoever did this accountable, but will need the public's help. We are offering a $10,000 reward for information leading to the arrest of the person responsible. . Video footage from local stores in the shopping plaza are being reviewed. The puppy was found in the dumpster on May 5th around 1pm in the parking lot of the shopping center: 49849 Harrison Street, Coachella, CA 92236. . #JusticeForHope #Coachella @animalhopeinlegislation @ktla5news @kaceymontoya

A post shared by Animal Hope and Wellness (@animalhopeandwellness) on May 8, 2019 at 6:20pm PDT

Animal Hope and Wellness Foundation, an animal rescue organization in Sherman Oaks, initially offered a $10,000 reward for information leading to the arrest of the person responsible. Now, that reward is up to $20,000, thanks to donations $5,000 each from actress Shannen Doherty and model Joanna Krupa.

Only a few weeks old, the pit bull puppy appears to have had her tail cut off, is severely burned, and is unable to walk due to both her age and the presumed assault and beating. A spokesperson at Animal Hope and Wellness says because she's so young they're fully confident she will learn to walk as she gets older.

The daughter of the woman who found her named her "Hope."

Hope is currently being cared for at the McGrath Veterinary Center in Sherman Oaks. A spokesperson told KNX she'll be in recovery for the next two weeks. "She's healing nicely, and responding well to her laser treatments, an alternative method to help her heal from her burn wounds."

Hope was discovered by someone rummaging through the trash who heard her crying. She took her to the owner of a local jewelry store, where she was rushed to an emergency vet.

Another puppy was found dumped in a Coachella trash bin. The two-week old named Hope has burns on her body with a $10,000 reward being offered for info. More @KNX1070 https://t.co/prmrdPxQyh (Video: Animal Hope and Wellness Foundation)

She was found just weeks after dozens of other dogs were rescued and a Coachella woman arrested after she was seen dumping a bag with seven puppies into a dumpster.