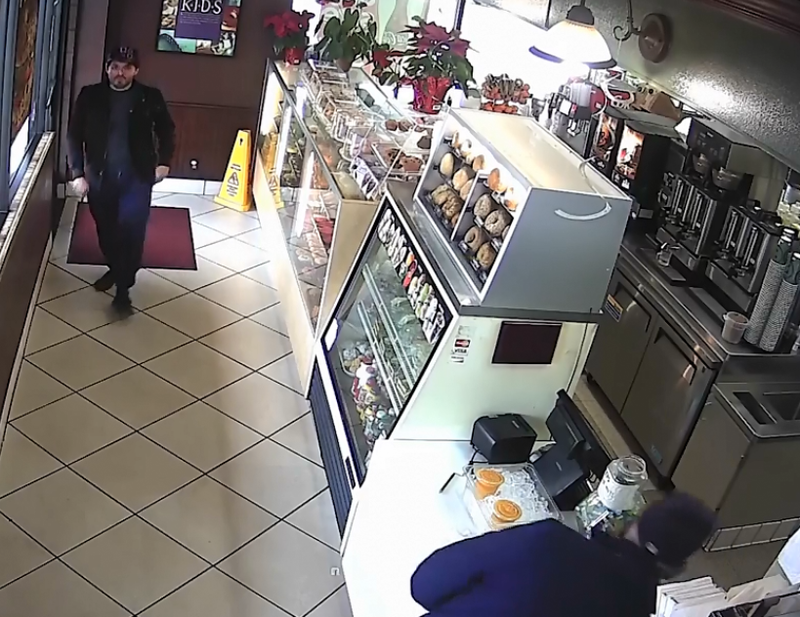 Deputies have made an arrest in the seemingly random stabbing of a man at a Maywood donut shop earlier this month.

Tips starting coming in with one of the callers identifying the man with the knife as 27-year-old Arnoldo Gonzales of Chino.

Detectives then found he had been arrested in Azusa in the last several days and moved quickly to compare information with police there.

On Wednesday, a Sheriff's SWAT team came to Gonzales home in Chino and arrested him without any resistance.

The knife seen in the video was also recovered.

He will be in court Friday morning for arraignment on attempted murder and other felony charges.

Surveillance video shows a man repeatedly plunging a knife into the victim's back February 3 before he ran out of the shop. Authorities say the victim's wounds were not life-threatening.

Sheriff's detectives released video surveillance footage Sunday of a suspect in the attempted murder of a 63-year-old man in a donut shop in Maywood earlier this month.

The video depicts the suspect entering the Yum Yum donut shop walking up behind the victim and stabbing the man in the back as he stood at the counter to order donuts and then running from the shop.

The attack took place about 3 p.m. on Feb. 10 at Yum Yum Donuts at the intersection of Atlantic Boulevard and Slauson Avenue, according to Deputy Michele Sanchez.

Deputies from the East Los Angeles station responded found the victim with a knife lodged in his upper body, according to Sanchez.

The victim was rushed to a hospital for treatment and was expected to survive, she said. The suspect was last seen heading north on Atlantic Boulevard and out of view.

The suspect was Hispanic, 25-30 years old, 5 feet 6, with a beard, wearing a black jacket, blue shirt, blue sweatpants, black shoes and a black hat, she said.