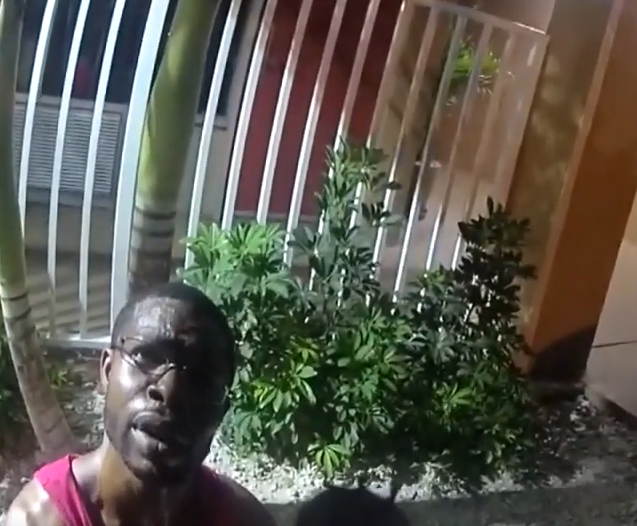 (CBS News) - The Broward Sheriff's Office says it's investigating one of its own after the agency was alerted to bodycam footage of an arrest, CBS Miami reports. The encounter happened in July 2017, but it is now coming to light.

The camera is worn by BSO Deputy James Cady. In the video, Cady approaches a man named Allen Floyd, who is seen sitting on the curb of a parking lot while holding his 9-month-old son.

He was then asked by Cady to hand over his ID. When Floyd questioned why, the deputy raised his voice, again demanded the ID and eventually grabbed Floyd with the baby still in his arms and placed him against a car.

"Don't, quit f***ing with me, boy," the deputy can be heard saying on the video.

The video was shared widely on social media and sparked outrage. LeBron James was among those who posted about it on Twitter. "!! Straight up Coward man," he commented.

The video was recently discovered by Broward Public Defender Howard Finkelstein while preparing for a case involving a woman, who is also seen in portions of the bodycam video.

The woman is accused of being drunk and breaking a flat-screen TV at Red Carpet Inn in Dania Beach. The call about that woman, who is Floyd's friend, was what initially brought deputies to the hotel.

On Jan. 30, Finkelstein sent a letter to the sheriff calling for an investigation. The public defender also stated Floyd was abused, verbally assaulted and choked.

"Deputy Cady's verbal assault coupled with him choking an otherwise cooperative bystander can only be characterized as unlawful touching," Finkelstein wrote. "In addition, Deputy Cady's use of the term 'boy' is offensive, condescending and demeaning. It carries racial connotations when used while addressing an adult black male."

The following day, the sheriff wrote in a letter he and his office were not aware of the incident until the complaint the day prior.

Records show Cady has been investigated before by the sheriff's office for use of force and conduct concerns. In 2003, he was cleared and in 2010, he was suspended for a day and told to review policy.

The deputy is still on patrol, according to a BSO spokesperson.

In a tweet Monday, BSO thanked the public defender for bringing the incident to their attention.

BSO also noted that anyone can contact Internal Affairs with concerns through mail, in person, online, or on the phone.