The pandemic has strained a lot of people in Southern California. Our KNX Hero of the Week from Glassell Park turned her unexpected situation into a positive, using her time to kick-off a new business and help others along the way.

Starting a new company was always in the back of Michelle Chu's mind. But it took a shelter dog named Kono to bring it to fruition.

"I was at the Inland Valley Humane Society, and I was walking down the line of kennels and he just started jumping up, trying to lick my face. And that was it!" says Michelle. "He chose me." 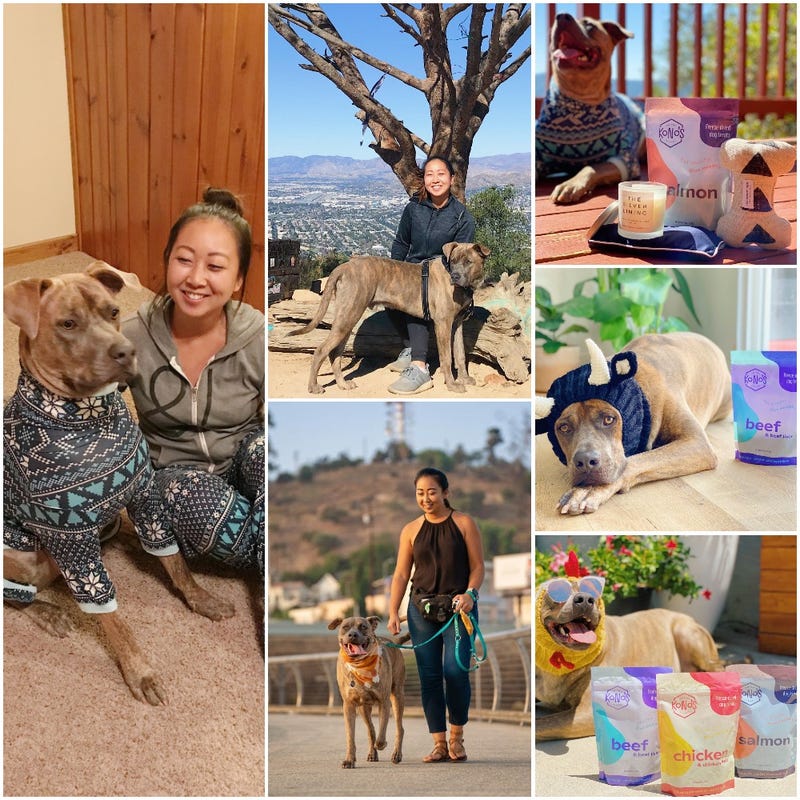 Kono is an American Staffy mix, and he was discovered on the streets of Pomona.

"He went from a 'street dog' to now running his own company!" Michelle jokes.

Kono is a big dog, and finding the right food for him became a challenge. So, Michelle decided to create her own dog food company. "I had been looking into a raw diet for him. And, it was super overwhelming."

When Michelle came across freeze-dried treats that are made from raw meat, Kono's Kitchen was born.

"I knew that if I were to start a company, especially one that was dog-related, I wanted to give back. It’s such a big part of my mission, of my company, that it has to be day one. So, ten percent of all the profits go to a featured rescue dog each month, donated to their medical costs."

Over the holidays, Michele started making treat boxes, and those pay it forward, as well. Each box includes special items from small business that are run by women of color.

"I really want to support and highlight other people of color, and especially small businesses. As someone who is Chinese-American, it’s important for me to uplift those around me."

So far, Kono's Kitchen is online only, and Michelle does most of the packing and distribution herself, from her own back yard. And, she still has her day job, working as a director with a digital marketing company!

In just a few months, Michelle Chu has affected the lives of many pets, pet owners, and small business owners. That is why she's our KNX Hero of the Week!

KNX Heroes presented by California Resources Corporation, saluting our military veterans, and all of our heroes!

You can also follow Michelle and Kono on social media:

You can also nominate a future KNX Hero of the Week at https://www.radio.com/knx1070/nominate