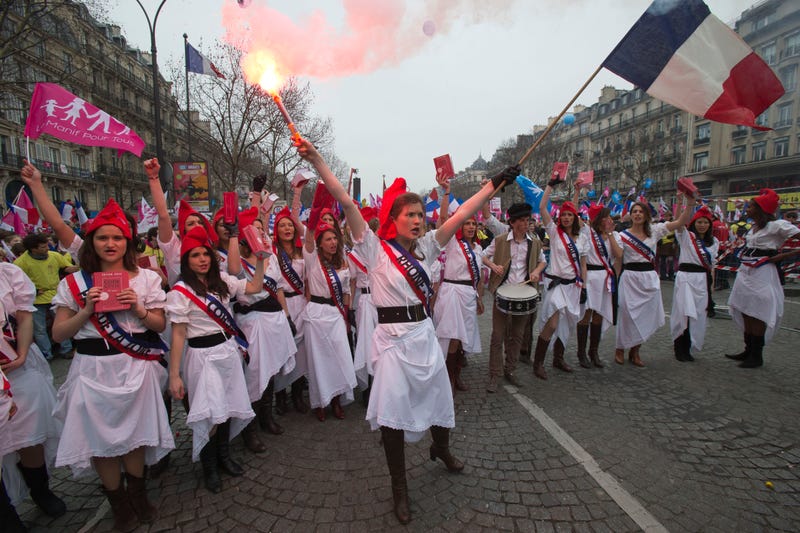 PARIS (AP) — French women enjoy a reputation for their instinctive knack for spot-on chic attire. But now they may well be confused.

Ministers, already working overtime to tamp down the coronavirus spread and ramp up the economy, have gotten side-tracked in a debate about whether crop tops or other skimpy clothing on adolescent girls in classrooms is a grave affront to the French Republic.

Education Minister Jean-Michel Blanquer has said that girls should go to school dressed in “a republican manner.” That apparently means prim and modest, but no one is quite sure.

Meanwhile, fueling the feeling that women in France just can’t win, some have come under fire recently for covering up too much — by wearing a Muslim headscarf.

Blanquer was responding to an initiative started on social media, dubbed the Monday, Sept. 14 Movement, encouraging students to come to school in their best “provocative” or “indecent” clothes. The idea was to claim freedom from what is seen as an implicit dress code in public schools, which have no written rules about attire.

In a land where portraits and statues of the bare-breasted symbol of France, Marianne, are omnipresent, Blanquer's remark drew mockery on social media. Some posts portrayed women of the French Revolution in their traditional “Phrygian” bonnets, and dresses with deep decolletés exposing cleavage.

The word “republicain," referring to the French Republic, has in recent years been increasingly thrown about by government officials to describe the values of the democratic system on which France has been built for more than 200 years. But many, even among his government colleagues, think Blanquer went too far.

“In France, everyone is free to dress as they like,” the minister in charge of equality between women and men, Elisabeth Moreno, said Tuesday in the daily Parisien. “Women took centuries to be able to free themselves of dress codes. This freedom (that has been won) has no price.”

For some, the education minister’s remark in response to the Sept. 14 movement is a minor dispute, but for others the serious issue of women’s rights is at stake. Both Moreno and the industry minister, Agnès Pannier-Runacher, regretted that girls alone were the focus of the debate.

A teacher at a high school in Alfortville, southeast of Paris, Francoise Cahen, tweeted: “The parents of young Marianne are asked to quickly pick up their child, sent away from school for her non-republican dress.” Attached was a picture of the bust of Marianne, France's national symbol, her breasts bared.

In another tweet, Cahen noted that what is really “indecent” at school is needy students who can’t afford school supplies or gym shoes.

Amid the derision and disagreements, the education minister might take comfort in a poll on skin-revealing clothes in school released Friday by the Ifop polling firm.

The poll of 2,027 adult men and women of all ages showed a broad opposition to such dress, with 73% of women opposed and 58% of men. The poll had a margin of error of around 3%.

Two French out of three (66%) opposed students going to school braless, including 41% of younger people. Plunging necklines also were seen as inappropriate classroom dress, while the popular crop tops baring midriffs got a 55% no from older people, while 59% of under-25s approved.

Pollsters linked the results not to republican dress but to an overall sense that it's “still up to girls to handle masculine desire” despite their generation's rejection of such notions.

The debate over school dress was also framed by the resurgence of the long-standing polemic over Muslim headscarves, seen as an affront to France’s secular foundations. The head coverings have been banned in French schools since 2004.

A Muslim university student who wears a headscarf was hounded off Twitter after demonstrating on French TV how fellow students can cook low-budget meals. And separately, the vice-president of the student union UNEF, Maryam Pougetoux, triggered an incident when she appeared before a parliamentary commission on youth and the coronavirus in her headscarf.

Several scandalized lawmakers walked out, starting with Anne-Christine Lang, of President Emmanuel Macron’s centrist party. She tweeted that as a “feminist attached to republican values ... and women’s rights,” she saw the veil as a “mark of submission” and had no choice but to leave.

UNEF replied that “to be feminist is as much to back the Monday, Sept. 14, movement as to back women who choose to wear" headscarves.